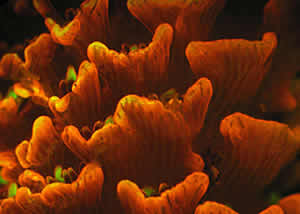 AUSTIN, Texas -- Young staghorn coral that fluoresce redder are less likely to settle and develop into coral polyps than their greener peers, University of Texas at Austin biologists have discovered.

The finding may help scientists monitor how corals adapt to global warming because the less likely coral larvae are to settle, the more likely they will disperse from their reef of origin.

"By simply looking at the color of a larval population, we may soon be able to say which larvae are going to be long-range dispersers and which will be short-range dispersers," says Mikhail "Misha" Matz, assistant professor of biology. "Under global warming, we expect a lot of evolution of this particular life history trait."

Matz says researchers expect to see long-range dispersers starting to win, because the corals need to shift to cooler latitudes.

The research was published this week in Proceedings of the Royal Society B.

For the study, Matz and his colleagues crossed different color morphs of the small staghorn coral, Acropora millepora, and exposed the offspring larvae to a settlement cue â- ground-up calcareous red algae. The scientists observed that larvae inheriting redder fluorescent color from their parents were less likely to settle and metamorphose into reef-building polyps than greener larvae.

Coral response to the settlement cue is under strong genetic control, but it's not clear yet how that is linked with fluorescence.

Alternatively, fluorescence could somehow be related genetically to the capacity of larvae to sense the proximity of a coral reef, and thus have a more direct correlation.

Matz and his colleagues will be investigating these two possibilities in further research. But in either case, Matz says the color of coral larvae fluorescence could serve as a viable marker as to whether they are settlers or swimmers.

The big question still remains as to why corals fluoresce in such spectacular colors.

"Bright, multicolored fluorescence of reef-building corals is one of the most spectacular and least understood visual phenomena in the ocean," says Matz, "and we still have no idea what purpose it serves. But our discovery is a really good lead towards determining the function of fluorescence."