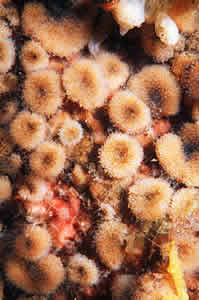 CAMBRIDGE, U.K. -- A tiny marine filter-feeder, that anchors itself to the sea bed, offers new clues to scientists studying the stability of the West Antarctic Ice Sheet â a region that is thought to be vulnerable to collapse(1).

As part of a study for the Census of Antarctic Marine Life (CAML), scientists from British Antarctic Survey (BAS) analyzed sea-bed colonies of bryozoans from coastal and deep sea regions around the continent and from further afield. They found striking similarities in particular species of bryozoans living on the continental shelves of two seas - the Ross and Weddell - that are around 1,500 miles apart and separated by the West Antarctic Ice Sheet.

This new finding, published this month in the journal Global Change Biology, leads the science team to conclude that these animals could have spread across both seas only by means of a trans-Antarctic seaway through what is now a 2 km solid layer of ice. They suggest also that this seaway opened up during a recent interglacial (warm period between ice ages) perhaps as recently as 125,000 years ago when sea level was about 5 meters higher than today.

While some geological evidence suggests that the West Antarctic Ice Sheet (WAIS) collapsed at least once in the last million years, scientists are keen to determine the frequency of collapse and to understand the processes and connections between warm periods and deglaciation events. Elsewhere around Antarctica the marine animals that could help scientists estimate the date when West Antarctica was ice free, were obliterated during ice ages by advancing glaciers that bulldozed their fossil remains off the continental shelf.

This new biological evidence contributes to glaciological investigations focused on the future stability of the WAIS, which may have a major impact on the rate of sea level rise in the coming centuries. Scientists estimate that a complete collapse of the WAIS would raise global sea level by around 3.3 m to 5 m.

"The West Antarctic Ice Sheet can be considered the Achilles heel of Antarctica and because any collapse will have implications for future sea level rise it's important that scientists get a better understanding of big deglaciation events. This biological evidence is one of the novel ways that we look for clues that help us reconstruct Antarctica's ice sheet history.

"Our new research provides compelling evidence that a seaway stretching across West Antarctica could have opened up only if the ice sheet had collapsed in the past.

"When we found groups of strikingly similar bryozoans hundreds of miles apart we knew we were onto something very interesting. Perhaps these species had survived the last ice age whereas in all other regions of Antarctica they were wiped out. We know that after the last ice age groups of bryozoans dispersed freely between many of the regions we studied. But because the larvae of these animals sink and this stage of their life is short â and the adult form anchors itself to the seabed â it's very unlikely that they would have dispersed the long distances carried by ocean currents. For the bryozoans on both the Weddell and Ross sea continental shelves to be more similar to one another than to any of those found in the waters in between is striking indeed. Our conclusion is that the colonisation of both these regions is a signal that both seas were connected by a trans-Antarctic seaway in the recent past."