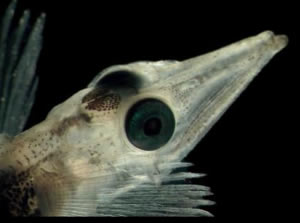 Chionodraco hamatus, an Antarctic ice fish, can withstand temperatures that freeze the blood of all other fish types. Credit: Russ Hopcroft, CoML 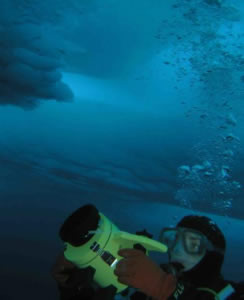 WASHINGTON, D.C. -- Earth's unique, forbidding ice oceans of the Arctic and Antarctic have revealed a trove of secrets to Census of Marine Life explorers, who were especially surprised to find at least 235 species live in both polar seas despite a distance of more than 13,000-kilometer distance in between.

The scientists found marine life that both poles apparently share in common include marathoners such as humpback, fin, and blue whales, but also worms, crustaceans, and angelic snail-like pteropods, the latter discoveries opening a host of future research questions about where they originated and how they wound up at both ends of the Earth. DNA analysis is underway to confirm whether the species are indeed identical.

Among many other findings, the scientists also documented evidence of cold water-loving species shifting towards both poles to escape rising ocean temperatures.

The discoveries are the result of a series of landmark, often perilous voyages conducted during International Polar Year, 2007-2008. Biologists braved waves of up to 16 meters (48 feet) while getting to and from the Antarctic while their Arctic colleagues often worked under the watchful eye of an armed lookout to protect them from polar bears.

The studies by a global network of polar researchers have added substantially to human knowledge about the diversity, distribution and abundance of marine life, with results to be fully detailed in the world's first Census report, to be released in London Oct. 4, 2010.

"The polar seas, far from being biological deserts, teem with an amazing quantity and variety of life," says Dr. Ian Poiner, Chair of the Census Scientific Steering Committee. "Only through the co-operation of 500 people from more than 25 countries could the daunting environmental challenges be overcome to produce research of such unprecedented scale and importance. And humanity is only starting to understand the nature of these regions."

The polar Census teams are documenting:

Antarctic seafloor: a single bioregion, and a cold incubator for new species

Previously thought to be low in species diversity and abundance, CAML researchers and collaborators have amassed biological data from nearly 1 million locations. Those places include seafloors exposed to light for the first time in as much as 100,000 years when ancient ice shelf lids melted and disintegrated in recent years.

Led by Drs. Michael Stoddart and Victoria Wadley of the Australian Antarctic Division, and Dr. Colin Summerhayes, Executive Director of the Scientific Committee on Antarctic Research, the Census of Antarctic Marine Life coordinated 18 major research voyages during IPY (2007-2008). That compares with two or three expeditions in a normal year.

The extensive sampling has provided both an immediate picture of unexpectedly rich marine life around Antarctica and the means to test important theories.

Research in the 1970's suggested separate bioregions around Antarctica. CAML's efforts, however, reveal life on the seafloor encircling Antarctica forms a single biological province, even though 8,500 km of ocean separates opposite sides of the continent.

Scientists are now analyzing hundreds of open ocean (pelagic) samples from all compass points around Antarctica to establish whether, as suspected, marine life distribution has been evened by the churn of the Antarctic Circumpolar Current. That swift-flowing current circles the polar continent twice as fast as the Gulf Stream flows from the Gulf of Mexico towards Europe.

Meanwhile, the polar marine explorers were startled when molecular techniques revealed that glacial cycles over millions of years made the Antarctic the cold incubator of many species residing today in more northern waters.

Today they theorize that the Antarctic also regularly refreshes the world's oceans with new varieties of sea spiders, isopods (crustaceans related to shrimp and crabs), and others as well. They believe the new species evolve when expansions of ice cloister Antarctica; when the ice retreats, they radiate northward along the same pathways followed by the octopuses.

The abundance of Antarctic marine biodiversity is recorded in the SCAR-MarBIN database, which today contains close to 1 million marine life observations below the Antarctic Circle. About half of Antarctic species are found nowhere else on Earth.

Many global collaborators teamed with the Census' project on Arctic Ocean Diversity, led by Drs. Rolf Gradinger, Bodil Bluhm and Russ Hopcroft of the University of Alaska, and Dr. Andrey Gebruk of the Shirshov Institute, Moscow. Together they completed 14 IPY expeditions, including 10 cruises.

Field work will continue this summer, including a cruise to the Beaufort Sea to investigate the potentially important role sea ice ridges could play as a refuge for marine life if ice loss continues long-term.

ArcOD researchers say subtle effects on marine life distribution, abundance and diversity due to recent warming in the Arctic have started appearing, most notably:

Meanwhile, researchers say smaller marine species are replacing larger ones in some Arctic waters. The reasons behind the shift are obscure but the implications for the Arctic food web may be profound.

The Census database known as OBIS (the Ocean Biogeographic Information System) today contains almost 1 million observations of more than 5,500 distinct taxa in Arctic waters, with more being added at an ever quickening pace.

Says Russ Hopcroft: "We have filled in major blank spots on the Arctic map, and continue to add more, though big unobserved areas remain."

New technologies are dramatically speeding Census research into the abundance, diversity and distribution of marine biodiversity.

Census researchers are using cell phone-like devices to learn about the distribution of large animals at both poles. For example, tracking devices fitted to narwhals, the ocean unicorn, record their Arctic migrations and provide as a by-product a wealth of rich data on the status of polar oceans, lending a major assist to science. Seals, meanwhile, captured before and after observations of the 2008 collapse of a large part of Antarctica's Wilkins ice shelf.

And DNA sequences, or barcodes, will dramatically accelerate the cataloguing of life's diversity, helping to identify new and cryptic species. In partnership with Canada's University of Guelph, ArcOD, CAML, their sister project, the Census of Marine Zooplankton, and others are collaborating in the Polar Barcode of Life project, with Belgium's SCAR-MarBIN creating data storage, analysis and visualization tools. CAML is barcoding some 3,000 Antarctic species; ArcOD has barcoded about 300 to date. With a completed molecular catalog, analysis of genetic variation within polar marine environments and at different depths will be far quicker and easier.

Others among the 17 Census of Marine Life projects contributing to the progress of understanding in polar regions is the International Census of Marine Microbes (ICoMM, http://icomm.mbl.edu), which was recently able to sequence the DNA of more than 370,000 individual microbes living in 2-to-10 liter seawater samples drawn from 16 points around the Antarctic. Work is underway to distinguish the species captured.

The History of Marine Animal Populations project researchers, meanwhile, studied monastic and government records dating back to the 1600s to reconstruct populations of walruses in the White and Barents seas.

Benefits to society accruing already from Census research include the identification of vulnerable marine habitats in the Southern Ocean, based on CAML information. Meanwhile, the marine component of a multi-national Circumpolar Biodiversity Monitoring Program (http://arcticportal.org/en/caff/cbmp) is in development with ArcOD participation.

Braving often bitter cold and perilous ocean conditions, the outstanding accomplishments of dedicated polar marine researchers have been honored recently in a number of countries. On a 2008 visit to Antarctica, for example, Brazilian President Luiz InÃ¡cio Lula da Silva, presented CAML scientist Dr. Lucia Campos with a national award for her work in that region. Researcher Dr. Angelika Brandt of Germany was awarded the prestigious biennial SCAR medal by the Scientific Committee on Antarctic Research. And Census scientists Drs. Eduardo Klein and Elizabeth Huck of the Universidad Simon Bolivar received Venezuela's highest civilian honor for their studies of Antarctic biodiversity.

Photography by ArcOD team members has earned a place in galleries from Alaska to the Smithsonian Institution in Washington DC, and inspired an exhibition of paintings based on the images. CAML and ArcOD researchers, meanwhile, have both provided marine life photos used for stamps in Canada and Australia commemorating IPY.

Concludes Ian Poiner: "In these unique oceans, where the water temperature is colder at the surface than below, we are establishing the first benchmarks of marine biodiversity against which change may be measured, a significant polar year legacy for future generations. The significant investment of nations, the skills of scientists from the many ocean research disciplines, and the social network of the Census of Marine Life made it happen."