Underwater Classroom Set To Kick Off; Webcast Live From Seafloor Lab Off Florida 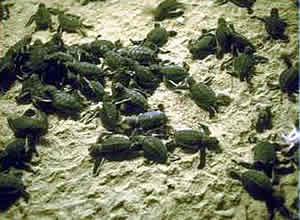 BIG PINK KEY, Florida -- Environmental enthusiasts should be able to observe infant loggerhead sea turtles hatching and emerging from their nest, via a live streaming “turtle webcam” installed on a private beach on Big Pine Key in the Lower Florida Keys.

Viewers can access the webcam, which offers daytime viewing of the loggerhead nest in natural light and infrared nighttime viewing to avoid disturbing the turtles, at www.fla-keys.com/turtlecam.

Once a nest has hatched, recorded footage of the hatching should be available for viewing on the site.

From early spring through early fall each year, turtles crawl ashore at night to dig nests and lay about 100 ping-pong-ball-sized eggs per nest. After covering them with sand, the turtles return to the water. Approximately two months later, hatchlings emerge and seek the water.

Any artificial light can disturb and disorient the turtles, interrupting the natural process. Laws prohibit people from touching or disturbing hatchlings, nests and nesting turtles.

Funded by the Florida Keys tourism council, the camera is part of a longstanding Keys effort to raise awareness of sea turtles and their needs. Since the mid-1980s, the Save-a-Turtle organization and Marathon’s Turtle Hospital have worked to protect and care for the region’s marine turtles and their habitat.