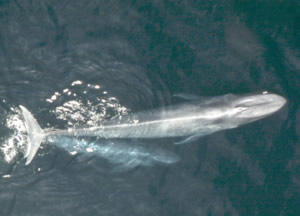 The near-eradication of the blue whale in the waters of the Antarctic during the early 20th century led to a paradoxical fall-off in krill, the small shrimp-like creatures on which they feed, a German report said Wednesday. Marine biologist Victor Smetacek told the German weekly Die Zeit that blue whales had once consumed 180 million tons of krill a year in the Southern Ocean - more biomass than the entire world fishing and aquaculture industry produces annually.

The "Antarctic Paradox" results from a biological cycle in which the whales play a key role in providing the iron to surface waters needed by the algae on which the krill feed.

The whales release the iron in their excrement, restarting the cycle from algae to krill to whale.

"The numerous whales maintained a very productive ecosystem as environmental gardeners. It collapsed with their decimation," Smetacek, a marine biologist with the Alfred Wegener research institute in the German port of Bremerhaven, said.

Blue whales declined rapidly in numbers up until the 1960s, when the International Whaling Commission (IWC) banned the hunting of the species, the world's largest mammal.

There have been suggestions in recent years to "seed" the sea with iron filings in order to promote algae. The aim is not to feed the krill, but to absorb carbon dioxide from the atmosphere in order to curb global warming

Environmentalists have come out against the idea, warning that the consequences cannot be predicted.