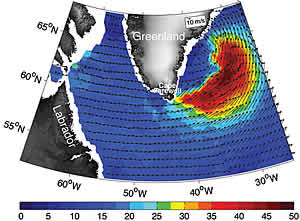 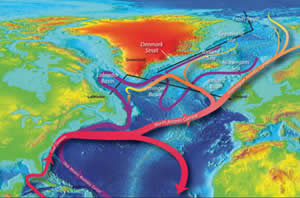 One of the "pumps" contributing to the ocean's global circulation suddenly switched on again last winter for the first time this decade, scientists reported Tuesday (Dec. 23) in Nature Geoscience. The finding surprised scientists, who had been wondering if global warming was inhibiting the pump—which, in turn, would cause other far-reaching climate changes.

The "pump" in question is the sinking of cold, dense water in the North Atlantic Ocean in the winter. It drives water down into the lower limb of what is often described as the Great Ocean Conveyor. To replace that down-flowing water, warm surface waters from the tropics are pulled northward along the Conveyor's upper limb.

The phenomenon helps draw down the man-made buildup of carbon dioxide from air to surface waters and eventually into the depths, where the greenhouse gas can be stored for centuries and offset global warming. It also transports warm tropical waters northward, where the ocean transfers heat to the air and keeps winter climate in the North Atlantic region much warmer than it would be otherwise.

A research team led by Kjetil Våge and Robert Pickart of Woods Hole Oceanographic Institution examined new data collected by robotic floats that have been drifting for several years in the Labrador and Irminger Seas around southern Greenland. These Argo floats—part of a fleet of 3,000 dispatched since 2000 through the world's oceans—descend to depths of 1.25 miles (2,000 meters), collect temperature and salinity data as they periodically rise toward the surface, and then transmit the data via satellite before descending again.

Unlike ships that usually (and wisely) avoid rough North Atlantic seas in winter, the Argo floats provide a way to measure the sinking of cold waters in the season that it occurs. The pump is driven by the contrast between frigid, dry winter air and warm water, which draws heat from the ocean into the atmosphere. That leaves the water denser, and it consequently sinks.

As air temperatures have generally warmed over the last two decades, the sinking of cold water in these northern seas has been either shallow or absent. But the new Argo float data showed that in the winter of 2007-2008, cold water sank significantly beyond .62 miles (1,000 meters) deep in northern seas for the first time in eight years and for only the second time since the mid-1990s. Beyond that depth, waters can be swept into lower limb of the Conveyor and carried around the world.

Sinking was undoubtedly enhanced last winter by air temperatures over the North Atlantic that were 9° to 11°F (5° to 6°C) colder than in the previous seven years. That often occurs when a seesawing pattern of high- and low- pressure air masses, called the North Atlantic Oscillation, is in its "positive" position, bringing frigid westerly winds from Canada streaking across the North Atlantic. But, curiously, that was also the case in 2006-2007, in which sinking did not occur.

The lack of substantial sinking throughout the decade meant that there was no "preconditioning"—that is, colder waters could not build up from previous winters to a point where they are easily pushed over a density threshold and sink the following year, the research team said. That made the sudden reappearance of sinking in 2007-2008 all the more surprising.

Digging deeper, the researchers found that local wind patterns, which occurred in 2007-2008 (but not the preceding winter), may have played a role. In particular, storms tended to track farther to the south, pulling cold air off the ice edge of eastern Canada into the Labrador Sea. The same storms also passed Cape Farewell at the southern tip of Greenland, creating a phenomenon known as Greenland tip jets: High winds from the west deflect around the glacial slopes of Greenland, accelerating as they draw cold, ocean-chilling air into a relatively small area over the southern Irminger Sea.

A final clue emerged. Analyzing satellite and in-situ ocean data, the researchers said a large amount pack ice and fresh water was exported into the northwest Labrador Sea in the summer of 2007. This froze the following winter, significantly extending the ice edge farther offshore. As a consequence, cold air from the North American continent traveled farther over ice, instead of warmer ocean waters, remaining cold until it hit warmer open water in the middle of Labrador Sea. The resulting temperature contrast helped trigger the sinking process.

The scientists noted "that the increased liquid and frozen freshwater flux into the Labrador Sea was probably tied to the large export of sea ice from the Arctic Ocean that contributed to the record minimum in sea-ice extent observed in the summer of 2007. Ironically, this disappearance of Arctic sea ice, which has been linked to global warming, may have helped trigger the return of deep wintertime [water sinking] to the North Atlantic."