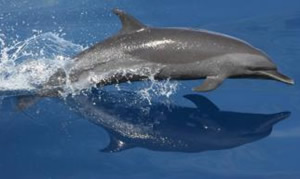 The Northeastern Offshore Spotted Dolphin has a falcate, or sickle-shaped dorsal fin and light spotting on the belly. credit NOAA. 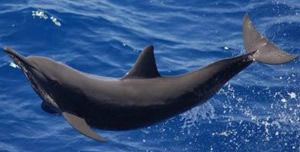 WASHINGTON, D.C. -- The numbers of Northeastern offshore spotted and eastern spinner dolphins in the eastern tropical Pacific Ocean are increasing after being severely depleted because of accidental death in the tuna purse-seine fishery between 1960 and 1990, according to biologists from NOAA's Fisheries Service.

"These estimates are encouraging because they are consistent with what we would expect to see if these stocks are recovering, now that reported fishery mortality has been dramatically reduced," said Dr. Lisa Ballance, director of NOAA's Southwest Fisheries Science Center protected resources division. "However, we have to be careful not to jump to final conclusions. We need to resolve the uncertainties around these estimates before we can definitively say these stocks are recovering."

Between 1960 and 1990, the northeastern offshore spotted and eastern spinner dolphin populations dropped to 20 percent and 30 percent, respectively, of their pre-fishery levels when dolphins were caught and died in tuna purse-seine nets. Since the early 1990s, however, the number of reported dolphin deaths has been very low because of severe restrictions on the fishery.

"We expected to see these populations begin their recovery years ago, because fishermen have been so successful at reducing dolphin deaths," said Tim Gerrodette of NOAA's Fisheries Service. "The new data are the first to indicate the beginning of a recovery, but these initial indications are not enough to be confident that the populations will continue to grow."

Researchers emphasize the need to continue to monitor dolphin populations at sea through comprehensive ecosystem research cruises, and to conduct an updated dolphin stock assessment that will include not only these most recent abundance estimates, but also additional information on dolphin life history, fishery mortality, and the ecosystem. This assessment will enable a more definitive interpretation of whether these abundance estimates indicate Eastern Tropical Pacific dolphins are recovering and the degree to which the fishery and other factors affect the conservation of these stocks.

Today's report stems from a series of research cruises conducted since 1986. It presents new estimates of abundance for 10 dolphin stocks for each survey year between 1986 and 2006. A summary of 2006 ETP dolphin abundance estimates may be found at, http://swfsc.noaa.gov/textblock.aspx?Division=PRD&ParentMenuId=228&id=12816