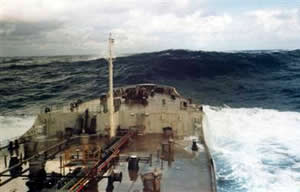 A rogue wave estimated at 60 feet moves away from a ship after crashing into it a short time earlier, in the Gulf Stream off Charleston, S.C. (NOAA)

LOS ANGELES, California -- Maritime folklore tells tales of giant "rogue waves" that can appear and disappear without warning in the open ocean. Also known as "freak waves," these ominous monsters have been described by mariners for ages and have even appeared prominently in many legendary literary works, from Homer's "Odyssey" to "Robinson Crusoe."

Once dismissed by scientists as fanciful sailors' stories akin to sea monsters and uncharted inlands, recent observations have shown that they are a real phenomenon, capable of destroying even large modern ships. However, this mysterious phenomenon has continued to elude researchers, as man-made rouge waves have not been reported in scientific literature â in water or in any other medium.

Now, researchers at the UCLA Henry Samueli School of Engineering and Applied Science have succeeded in creating and capturing rogue waves. In their experiments, they have discovered optical rogue waves â freak, brief pulses of intense light analogous to the infamous oceanic monsters â propagating through optical fiber. Their findings appear in the Dec. 13 issue of the journal Nature.

It is thought that rogue waves are a nonlinear, perhaps chaotic, phenomenon, able to develop suddenly from seemingly innocuous normal waves. While the study of rogue waves has focused on oceanic systems and water-based models, light waves traveling in optical fibers obey very similar mathematics to water waves traveling in the open ocean, making it easier to study them in a laboratory environment.

Still, detecting a rogue wave is like finding a needle in a haystack. The wave is a solitary event that occurs rarely, and, to make matters worse, the timing of its occurrence is entirely random. But using a novel detection method they developed, the UCLA research group was able to not only capture optical rogue waves but to measure their statistical properties as well.

They found that, similar to freak waves in the ocean, optical rogue waves obey "L-shaped" statistics - a type of distribution in which the heights of most waves are tightly clustered around a small value but where large outliers also occur. While these occurrences are rare, their probability is much larger than predicted by conventional (so-called normal or Gaussian) statistics.

"This discovery is the first observation of man-made rogue waves reported in scientific literature, but its implications go beyond just physics," said Bahram Jalali, UCLA professor of electrical engineering and the researcher group leader. "For example, rare but extreme events, popularly known as "black swans," also occur in financial markets with spectacular consequences. Our observations may help develop mathematical models that can identify the conditions that lead to such events."