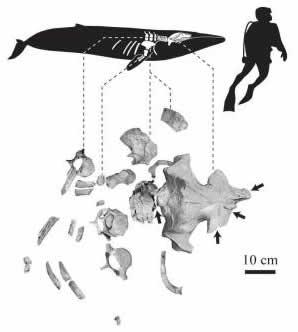 "Whale-fall skeleton" A reconstruction of the fossil whale from AÃ±o Nuevo Island, California, with a SCUBA diver for scale. Credit: Nick Pyenson

BERKELEY, California -- A fossilized whale skeleton excavated 20 years ago amid the stench and noise of a seabird and elephant seal rookery on California's AÃ±o Nuevo Island turns out to be the youngest example on the Pacific coast of a fossil whale fall and the first in California, according to University of California, Berkeley, paleontologists.

Whale falls, first recognized in the 1980s, are whale carcasses that fall to the deep-ocean floor where, like an oasis in the desert, they attract a specialized group of clams, crabs and worms that feed for up to decades on the oil-rich bones and tissues.

Some scientists think these random, deep-ocean oases are stepping stones for organisms moving from one ocean floor environment to another - whether a hot vent, a cold seep or a whale carcass - in search of sustenance from energy-rich chemicals.

"The fossil whale fall shows that these deep-sea communities didn't need especially large whales as a source of nutrients - in fact, the fossil whale from AÃ±o Nuevo Island was no longer than a VW bug," said Nick Pyenson, a graduate student in UC Berkeley's Department of Integrative Biology.

Pyenson and museum scientist David M. Haasl, both of UC Berkeley's Museum of Paleontology, published their findings in this week's online edition of the journal Biology Letters.

The AÃ±o Nuevo skeleton, discovered in 1987 by then-UC Santa Cruz graduate student Brian Fadely and excavated by Graham Worthy and local fossil expert Frank Perry, was considered a rather small and unremarkable fossil whale - at 11 feet, it was less than half the size of today's smallest baleen whales. The bones, including skull, spine and ribs, were displayed at Long Marine Laboratory in Santa Cruz until the lab donated the partially articulated skeleton to the Museum of Paleontology in 2005.

As Pyenson prepared it for the museum's collection, however, he noticed small clams in the nooks and crannies of the skull. He found 21 clams in all, each less than a centimeter in length, or two-fifths of an inch, plus one snail. Most of these organisms were on the skull, but some were nestled in the vertebrae. Haasl, a mollusk expert, thought the clams might be similar to those that cluster around whale falls today and that are able to extract energy from chemicals in bones with the help of specialized symbiotic bacteria. At whale fall depths of more than 1,000 meters, there is no light for photosynthesis.

Based on the shape of the fossil clam shells attached to the whale skeleton, Pyenson and Haasl determined that they belong to the same group of mollusks whose living relatives are chemosynthetic, confirming their initial hypothesis that this was a whale fall. A visit by Pyenson and Haasl to AÃ±o Nuevo Island in January 2007 showed that the whale came from 15 million-year-old sediments, the Monterey Formation, making the AÃ±o Nuevo find much younger than most fossil whale falls discovered around the globe, the oldest of which date from 40 million years ago, Pyenson said.

Whale falls were unknown to science until 1989, when the first example of a deep-sea community living on recently deceased whale carcasses was reported from southern California.

"The ocean floor is pretty much a desert until you get a whole whale carcass sinking to the bottom," Pyenson said. "We don't know how these creatures know to colonize it. Are they ever-present on the sea floor waiting for an animal to fall" But when the whale carcass hits, it forms this island refuge of high nutrient levels that can sustain an undersea community, some scientists calculate, for decades."

Over the past 18 years, more whale falls have been found around the world, and paleontologists have found examples in the fossil record as well. Most fossil examples, however, consist of isolated bones adjacent to deep-sea mollusks, Pyenson said. Little is known about the size or identity of the whale host.

In contrast, the AÃ±o Nuevo skeleton was unusually complete and hosted multiple mollusks. It also was small, which suggested to Pyenson that these specialized deep-sea communities didn't need large whale carcasses to evolve. Previous researchers had hypothesized that whale-fall communities evolved with the origin of large baleen whales, such as blue whales, and oil-rich bones. Pyenson and Haasl proposed instead that the oil content of the whale's bones was the more crucial factor.

"What we have are relatives of modern chemosynthetic clams associated directly with the skeleton of a tiny, tiny whale, smaller than any other known from modern whale falls," Pyenson said. "That tells us that you don't need very large whales to sustain a whale fall, but what you probably need is a really oily skeleton."

Because they are more buoyant, oil-rich bones are likely one adaptation to allow deep diving, Pyenson said. The AÃ±o Nuevo whale fall find puts a lower limit of 11 million years on the origin of oily bones in whales, he added.

Pyenson and Haasl are currently working with scientists at the Monterey Bay Aquarium Research Institute who routinely study recent whale falls in Monterey Bay. They hope to do "side-by-side comparisons of the fossil and modern whale-fall clam shells" to better characterize those from the fossil whale fall.