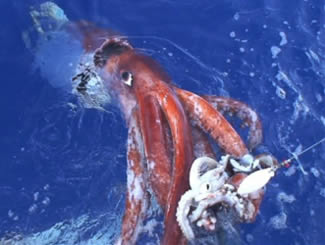 In this photo released by Tsunemi Kubodera,a giant squid attacking a bait squid is being pulled up by the research team. 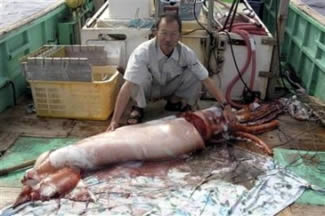 Tsunemi Kubodera, chief of Division of Invertebrate Zoology at the National Science Museum of Japan, with the giant squid

TOKYO, Japan -- A Japanese research team has succeeded in filming a giant squid live — possibly for the first time — and says the elusive creatures may be more plentiful than previously believed, a researcher said Friday.

The research team, led by Tsunemi Kubodera, videotaped the giant squid at the surface as they captured it off the Ogasawara Islands south of Tokyo earlier this month. The squid, which measured about 24-feet long, died while it was being caught.

“We believe this is the first time anyone has successfully filmed a giant squid that was alive,” said Kubodera, a researcher with Japan’s National Science Museum. “Now that we know where to find them, we think we can be more successful at studying them in the future.”

Giant squid, formally called Architeuthis, are the world’s largest invertebrates. Because they live in the depths of the ocean, they have long been wrapped in mystery and embellished in the folklore of sea monsters, appearing in ancient Greek myths or attacking the submarine in Jules Verne’s “20,000 Leagues Under the Sea.”

The captured squid was caught using a smaller type of squid as bait, and was pulled into a research vessel “after putting up quite a fight,” Kubodera said.

“It took two people to pull it in, and they lost it once, which might have caused the injuries that killed it,” he said.

The squid, a female, was not fully grown and was relatively small by giant squid standards. The longest one on record is 60 feet, he said.

Kubodera and his team had been conducting expeditions in the area for about three years before they succeeded in making their first contact two years ago. Last year, the team succeeded in taking a series of still photos of one of the animals in its natural habitat — also believed to have been a first.

Until the team’s successes, most scientific study of the creatures had to rely on partial specimens that had washed ashore dead or dying or had been found in the digestive systems of whales or very large sharks.

Kubodera said whales led his team to the squid. By finding an area where whales fed, he believed he could find the animals. He also said that, judging by the number of whales that feed on them, there may be many more giant squid than previously thought.