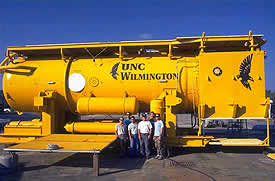 Aquarius was refurbished in 1997 by the University of North Carolina at Wilmington.

WILMINGTON, North Carolina -- NASA will test concepts for future space exploration next month by sending three astronauts and an oceanographer on a mission to an underwater laboratory off the coast of Florida.
Aquarius was refurbished in 1997 by the University of North Carolina at Wilmington.

"Whether walking and working on the ocean floor or exploring the lunar surface, significant prior planning, training and dependence on sophisticated life support systems is necessary," said NEEMO Project Manager Bill Todd, Johnson Space Flight Center (JSC), Houston. "Sure, you won't see any pretty fish on a moonwalk, but you will see the same types of crew, hardware and procedure challenges that are associated with this type of an ocean habitation and research mission."

This mission also exemplifies the partnership between NASA and NOAA for NEEMO.

"NOAA will use this opportunity to build on its undersea research efforts and interagency partnership successes," said Kohanowich.

"Humans working both in space and under the ocean face similar challenges of lack of oxygen, weightlessness, remoteness, extreme pressure differentials and cramped quarters. Many techniques, technologies, and skills necessary to work underwater can be adapted for lunar research, and vice versa," Kohanowich stated.

Aquarius is owned and funded by NOAA and operated by the University of North Carolina at Wilmington. This is the second of three NEEMO missions planned for this year. The work will be monitored at JSC's Exploration Planning Operations Center (ExPOC), Houston. The 45-foot-long, 13-foot-diameter complex is three miles off Key Largo in the Florida Keys National Marine Sanctuary. It rests about 62 feet beneath the surface. A shore-based mission control center in Florida monitors the habitat and crew.

Born in Saitama, Japan, Wakata reported to JSC in August 1992. He flew as the first Japanese mission specialist on the space shuttle mission STS-72 in January 1996. He flew to the space station on STS-92 in October 2000. Wakata has a Bachelor of Science, a Master of Science, and doctorate in aerospace engineering from Kyushu University, Japan.

Selected as a mission specialist by NASA in July 2000, Feustel completed two years of initial training and evaluation before assignment to the Astronaut Office Space Shuttle and Space Station branches. He has an Associate Science degree from Oakland Community College in Michigan, a Bachelor of Science and a Master of Science from Purdue University, West Lafayette, Ind., and a Ph.D. in geological sciences from Queen's University, Kingston, Ontario, Canada. Feustel considers Lake Orion, Mich., his hometown.

Selected as a mission specialist by NASA in July 2000, Nyberg considers Vining, Minn., her hometown. She served as crew support astronaut for Expedition 6 at the International Space Station and currently supports the Space Shuttle Branch and the Exploration Branch. She has a Bachelor of Science from the University of North Dakota, and a Master of Science and Ph.D. in mechanical engineering from the University of Texas at Austin.

Kohanowich became the deputy director of NOAA's Undersea Research Program in April 2005. Previously she was a U.S. Navy deep sea diver and oceanographer and retired as a commander after 23 years of service. Early in her career, Kohanowich supported 1,000 FSW (feet of sea water) saturation dives at the Navy Experimental Diving Unit.