What Do Killer Whales Eat In The Arctic? 'Whatever They Can Catch'

Research: Killer Whales May Have Menopause So Grandma Can Look After The Kids 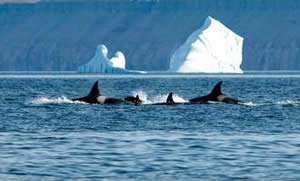 LONDON, United Kingdom -- Killer whales (Orcinus orca) are the top marine predator, wherever they are found, and seem to eat everything from schools of small fish to large baleen whales, over twice their own size. The increase in hunting territories available to killer whales in the Arctic due to climate change and melting sea ice could seriously affect the marine ecosystem balance. New research published in BioMed Central's re-launched open access journal Aquatic Biosystems has combined scientific observations with Canadian Inuit traditional knowledge to determine killer whale behaviour and diet in the Arctic.

Orca have been studied extensively in the northeast Pacific ocean, where resident killer whales eat fish, but migrating whales eat marine mammals. Five separate ecotypes in the Antarctic have been identified, each preferring a different type of food, and similar patterns have been found in the Atlantic, tropical Pacific, and Indian oceans. However, little is known about Arctic killer whale prey preference or behaviour.

Traditional Ecological Knowledge (TEK) is increasingly being used to supplement scientific observations. Researchers from Manitoba visited 11 Canadian Nunavut Inuit communities and collated information from over 100 interviews with hunters and elders.

The type of reported prey varied between areas. Most incidences of killer whales eating bowhead whales occurred in Foxe Basin and narwhal predation was more frequent around Baffin Island. Inuit were also able to describe first-hand how killer whales hunted, including several reports of how killer whales co-operated to kill the much larger bowhead. During the hunt some whales were seen holding the bowhead's flippers or tail, others covering its blowhole, and others biting or ramming to cause internal damage. Occasionally dead bowheads, with bite marks and internal injuries but with very little eaten, are found by locals.

'Aarlirijuk', the fear of killer whales, influenced prey behaviour with smaller mammals seeking refuge in shallow waters or on shore and larger prey running away, diving deep, or attempting to hide among the ice. Even narwhal, which are capable of stabbing a killer whale with their tusks (although this is likely to result in the deaths of both animals), will run to shallow waters and wait until the whales give up.

Killer whales are seasonal visitors to the area and have recently started colonising Hudson Bay (possibly due to loss of summer sea ice with global warming). Local communities are reliant on the very species that the orcas like to eat. Dr Steven Ferguson from the University of Manitoba who led this research commented, "Utilising local knowledge through TEK will help scientists understand the effects of global warming and loss of sea ice on Arctic species and improve collaborative conservation efforts in conjunction with local communities."