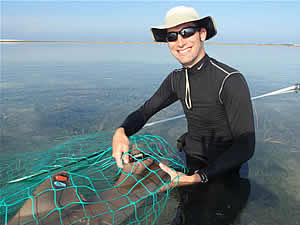 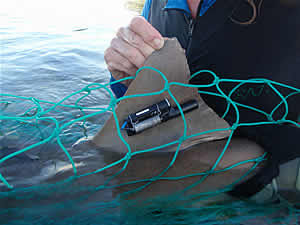 An accelerometer on a nurse shark dorsal fin in the FL Keys. Credit Mote Marine Laboratory.JPG

Motion sensors like those used in smart phones are helping to reveal how sharks spend each moment in the wild, say Mote Marine Laboratory scientists who were the first to use such sensors to classify mating and other behaviors in wild sharks.

During their study, which was recently published in the science journal Endangered Species Research, Mote scientists monitored mating in wild nurse sharks by attaching accelerometers to them. Accelerometers are the motion-sensitive computer chips used in smart phones, iPods and the Nintendo Wii. Attached to sharks, accelerometers can detect each flick of a shark's tail or tilt of its body and give scientists insight into what sharks are doing and when.

For years, Mote scientists have studied where sharks travel using sound-emitting tags that are detected by underwater receivers, or hydrophones, as well as satellite-linked tags that track sharks' locations continuously.

But these types of tags can't reveal what sharks do once they arrive at their favorite places. Like teenagers hanging out at burger joints, sharks also stop traveling to feed, rest, find a mate and more - behaviors that are especially hard to monitor in wild aquatic animals like sharks and other fish that don't even surface to breathe.

"Accelerometer tags are unique in that they record the actual physical movements of the animal's body," said the study's lead author, Dr. Nick Whitney, a post-doctoral scientist in Mote's Center for Shark Research. "So that gives us a much better idea of what the animal is doing - not just where it's going."

Whitney and colleagues fitted four female nurse sharks in the Dry Tortugas with accelerometers in June 2008. These islands off the Florida Keys were chosen as the study site because Mote scientists had already shown that it was a breeding ground for the species. The Dry Tortugas also have shallow areas with clear water and the researchers would be able to see what the sharks were doing as the accelerometers recorded the sharks' movements.

Mote's accelerometer tags successfully showed when nurse sharks were swimming and resting. They also picked up on mating behaviors - thrashing, barrel rolls, headstands and all. "There doesn't seem to be much mating going on at night, which is really surprising, because sharks are thought to be more active at night," Whitney said. The sharks also mated in deeper water than scientists had ever observed for sharks in this area.

Whitney hopes that accelerometers can eventually be used to study mating behaviors in other species that are harder to observe: bull sharks, hammerheads, sandbar sharks and more. Finding where sharks mate is critical for protecting their breeding grounds, he says.

Mote scientists have a history of groundbreaking research on shark breeding. The first detailed studies of sharks mating in the wild were conducted by Mote scientist Wes Pratt and Mote adjunct Dr. Jeffrey Carrier of Albion College, whose research on nurse sharks and other species since the 1990s has documented their complex mating behaviors and helped reveal important breeding areas in the Dry Tortugas. Carrier and Pratt, who is now a scientist-in-residence at Mote, are co-authors of the current study along with Mote volunteer Theo Pratt.

Mote scientists plan to refine their accelerometer studies with sharks in the lab, and hope to eventually track these fine-scale behaviors in wild sharks for weeks at a time.