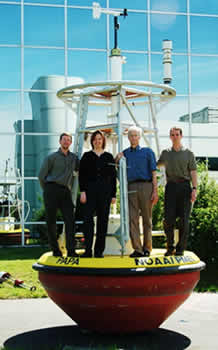 ARLINGTON, Virginia -- he first buoy to monitor ocean acidification has been launched in the Gulf of Alaska. Attached to the 10-foot-diameter buoy are sensors to measure climate indicators.

Acidification is a result of carbon dioxide absorbed by the seas.

"The instruments will measure the air-sea exchange of carbon dioxide, oxygen and nitrogen gas in addition to the pH, a measure of ocean acidity, of the surface waters," said Steven Emerson of the University of Washington, the project's lead scientist. "This is the first system specifically designed to monitor ocean acidification."

The buoy is anchored in water nearly 5,000 meters deep. Once it hit the water, the buoy immediately began to transmit data via satellite.

The buoy is part of a National Science Foundation (NSF) grant awarded to oceanographers at the University of Washington and Oregon State University, working in collaboration with scientists at NOAA's Pacific Marine Environmental Laboratory (PMEL), and at Fisheries and Oceans Canada and the Institute of Ocean Sciences in Sidney, B.C.

"Information from this buoy will lead to a better understanding of ocean acidification--a growing threat to the world's oceans--by helping scientists determine exactly how physical and biological processes affect carbon dioxide in the north Pacific Ocean," said Fred Lipschultz, program director in NSF's division of ocean sciences. The grant was funded through NSF's Biocomplexity in the Environment emphasis area on Carbon and Water in the Earth System.

The goal of the research is to examine how ocean circulation and ecosystems interact to determine how much carbon dioxide the north Pacific Ocean absorbs each year.

"The Gulf of Alaska region is particularly important because it is likely to be one of the first regions to feel the impacts of ocean acidification," said Christopher Sabine, a PMEL oceanographer.

"This a significant step in furthering our understanding of how the ocean is reacting to carbon dioxide, as well as an important addition to the growing Global Ocean Observing System of Systems, which incorporates the best technology to provide the best science to help decision makers and the general public," said Richard Spinrad, assistant administrator of NOAA's Office of Oceanic and Atmospheric Research.