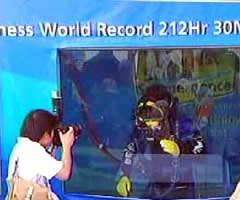 He hopes to emerge nine days later - past 12.04pm on Christmas Day - to set a new world record.

Until then, he will not be allowed to surface - though he can take a five minute break every continuous 60 minutes.

Khoo is expected to face several challenges like dehydration, nausea and vertigo, and divers from Fisherman Scuba and Singapore Civil Defence Force paramedics are standing by, just in case.