An image of he Louisiana Pancake Batfish (Halieutichthys intermedius) taken by one of its discoverers, Prosanta Chakrabarty 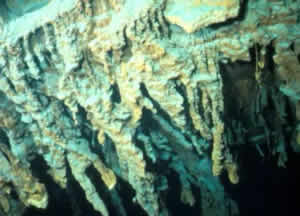 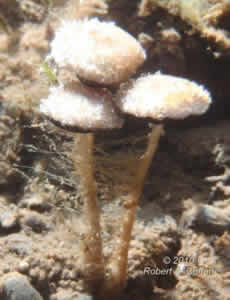 TEMPE, Arizona -- The International Institute for Species Exploration at Arizona State University and a committee of taxonomists from around the world â scientists responsible for species exploration and classification â announced their picks for the top 10 new species described in 2010. The May 23 announcement coincided with the anniversary of the birth of Carolus Linnaeus, the Swedish botanist who was responsible for the modern system of plant and animal names and classifications.

On this year's top 10 new species list are a leech with enormous teeth, an iron-oxide consuming bacterium discovered on a rusticle from the RMS Titanic, a batfish flat as a pancake that appears to hop in the water, and fungi that emit bright yellowish-green light from their gel-coated stems. The top 10 new species also include a jumping cockroach, a six-foot long fruit-eating lizard, and a duiker first encountered at a bushmeat market in Africa. Rounding out this year's top 10 are a cricket that pollinates a rare orchid, a mushroom that fruits underwater, and an orb-weaving spider named for Darwin that builds webs large enough to span rivers and lakes.

Photos and other information about the top 10 new species, including the explorers who made the discoveries, are online at http://species.asu.edu. Also at the site is a Google world map that pinpoints the location for each of the top 10 new species. This year's top 10 come from around the world, including Brazil, the Gulf of Mexico, the Mascarene Islands in the Indian Ocean, Madagascar, the North Atlantic Ocean, Oregon, Peru, the Philippines, South Africa and West Africa.

The winners are â¦

Among this year's top 10 picks is a leech, less than 2 inches in length but with a single jaw and gigantic teeth, earning it the name Tyrannobdella rex, which means "tyrant leech king." Found in Peru, this leech was discovered attached to the nasal mucous membrane of a human. According to the scientists who reported the discovery, there are 600 to 700 species of described leeches, yet there could be as many as 10,000 more throughout the world.

Also making the list is the iron-oxide consuming bacterium that was discovered on a rusticle from the RMS Titanic and named Halomonas titanicae by a team of scientists from Dalhousie University in Canada and the University of Sevilla in Spain. The passenger steamship Titanic struck a massive iceberg in 1912 on its maiden voyage and sank deep in the Atlantic Ocean, where it has been deteriorating. Studies show that the bacterium sticks to steel surfaces, creating knob-like mounds of corrosion products. Researchers believe this bacterium could be useful in the disposal of old ships and oil rigs that lie deep in the ocean.

A top 10 choice in the fish category is a pancake batfish that lives in waters either partially or fully encompassed by the 2010 oil spill in the Gulf of Mexico. Named Halieutichthys intermedius, this bottom-dwelling species seems to hop on its thick, arm-like fins as it moves awkwardly in the water, resembling a walking bat. John Sparks, curator of ichthyology at the American Museum of Natural History, one of the scientists who reported the discovery, said: "If we are still finding new species of fishes in the Gulf, imagine how much diversity, especially microdiversity, is out there that we do not know about."

Lighting up the top 10 is a luminescent fungus collected in SÃ£o Paulo, Brazil, found on sticks in an Atlantic forest habitat. The teeny mushrooms, less than 8 millimeters in diameter with caps smaller than 2 centimeters across, have gel-coated stems that glow constantly, emitting a bright, yellowish-green light. San Francisco State University biology professor Dennis Desjardin and his colleagues who made the discovery, named the new species Mycena luxaeterna (eternal light) after a movement in Mozart's "Requiem." Desjardin, who has discovered more than 200 new fungi species, noted that of the estimated 1.5 million species of fungi on Earth, only 71 species are known to be bioluminescent.

The Silvermine Nature Reserve, part of Table Mountain National Park in South Africa, is home to another character on this year's top 10 list â a new species of cockroach that exhibits unusual morphology with legs that are highly modified for jumping. Named Saltoblattella montistabularis â Saltoblattella is the Latin translation of "jumping small cockroach" â this critter has jumping ability that is on par with grasshoppers. Prior to its discovery, jumping cockroaches were only known from the Late Jurassic. In addition to the leg modifications, it has hemispherical shaped eyes, rather than kidney shaped eyes, which protrude from the sides of the head, and its antennae have an additional fixation point to help stabilize it during jumping.

At 6 feet 6 inches in length, a frugivorous (fruit-eating) monitor lizard found in the Northern Sierra Madre Forest on Luzon Island in the Philippines is the longest species to make this year's top 10. Weighing only 22 pounds, this species is brightly colored with stripes of gold flecks. Its scaly body and legs are a blue-black mottled with pale yellow-green dots and its tail is marked in alternating segments of black and green. Named Varanus bitatawa, this lizard spends most of its time in trees and has become a flagship species for conservation in the Philippines.

A new duiker (antelope) from West Africa was first encountered at a bushmeat market, a surprising find, according to the scientists who reported the new species in Zootaxa. "The discovery of a new species from a well-studied group of animals in the context of bushmeat exploitation is a sobering reminder of the mammalian species that remain to be described, even within those that are being exploited on a daily basis for food or ritual activities," wrote Marc Colyn from the University of Rennes, France, and his co-authors. The species is named Philantomba walteri or "Walter's Duiker" for the late Walter N. Verheyen, in honor of his work on African mammals. Verheyen reportedly collected the first specimen at Badou, Togo, in 1968.

Glomeremus orchidophilus â a raspy cricket â made the top 10 list for its distinction of being the only pollinator of the rare and endangered orchid Angraecum cadetii on RÃ©union in the Mascarene Archipelago in the Indian Ocean. The scientists who made the discovery wrote that this species, which belongs to a subfamily of crickets that make a raspy sound, represents the first supported case of regular pollination by an insect from the order Orthoptera in extant flowering plants.

Scientists found a species of gilled mushroom in the northwestern United States submerged in the clear, cold, flowing waters of the upper Rogue River in Oregon. What makes Psathyrella aquatica distinct, and a member of this year's top 10, is that it was observed over 11 weeks, fruiting underwater.

Rounding out the top 10 picks is an orb-weaving spider from Madagascar that was named for Charles Darwin â Caerostris darwini. The webs of Darwin's Bark Spider have been found spanning rivers, streams and lakes, and in one instance, a web stretched 82 feet across a Madagascar river with at least 30 insects trapped in it. But length of the web isn't the only distinction of this species. The silk spun by these spiders is more than two times stronger than any other known spider silk and reportedly 10 times stronger than a similarly sized piece of Kevlar.

"At the same time that astronomers search for Earth-like planets in visible space, taxonomists are busily exploring the life forms of the most Earth-like planet of all, our own," said Quentin Wheeler, an entomologist who directs the International Institute for Species Exploration at Arizona State University.

"We can only realistically aspire to sustainable biodiversity if we first learn what species exist to begin with. Our best guess is that all species discovered since 1758 represent less than 20 percent of the kinds of plants and animals inhabiting planet Earth. A reasonable estimate is that 10 million species remain to be described, named, and classified before the diversity and complexity of the biosphere is understood," he said.

To help draw attention in a fun-filled way to biodiversity, the field of taxonomy, and the importance of natural history museums and botanical gardens, an international committee of taxon experts make the selection of the top 10 new species from the thousands described in the previous calendar year, explained Wheeler.

"Charting the species of the world and their unique attributes are essential parts of understanding the history of life," he said. "It is in our own self-interest as we face the challenges of living on a rapidly changing planet that we understand the origin and 3.8 billion year history of evolution."

Wheeler has advocated a new generation of cyber-tools and Web accessible resources that will vastly accelerate the rate at which humans are able to discover and describe species.

"Most people do not realize just how incomplete our knowledge of Earth's species is or the steady rate at which taxonomists are exploring that diversity. We are surrounded by such an exuberance of species diversity that we too often take it for granted," he said.

Commemorating May 23 birth of Linnaeus

The annual top 10 new species announcement commemorates the anniversary of the birth of Carolus Linnaeus, who initiated the modern system of plant and animal names and classifications. The 300th anniversary of his birth on May 23 was celebrated worldwide in 2007.

Since Linnaeus initiated the modern systems for naming plants and animals in the 18th century, an estimated 2 million species have been named, described and classified. Scientists estimate there are between 10 million and 100 million species on Earth, though most set the number closer to 12 million.

The list of the top 10 new species is issued annually by ASU's International Institute for Species Exploration as part of its public awareness campaign to shine attention on biodiversity and the field of taxonomy. Previous top 10 lists are online at http://species.asu.edu.

An international committee of experts, chaired by Mary Liz Jameson, an associate professor at Wichita State University, selected the top 10 new species for this year's list. Nominations were invited through the species.asu.edu website and also generated by institute staff and committee members.

"Committee members had complete freedom in making their choices and developing their own criteria, from unique attributes or surprising facts about the species to peculiar names," Wheeler noted.

"Each of these amazing species discoveries tells a story about our planet; they are pieces of the puzzle that help us to understand how all of the components of life on Earth work together," said Jameson. "That beautiful, luminescent mushroom â its all-day glow attracts small insects that help to disperse the mushroom's spores. The rust-eating bacterium â it recycles even the most titanic of human creations so that the constituents can be used by other creatures.

"I think that the top 10 species helps to bring attention to the pieces of the puzzle that are still waiting to be discovered â whether it's in your own backyard, a health clinic in Peru, in the deep ocean, or a market in West Africa. Biodiversity science is all about exploration and discovery â cool stuff," she said.

Nominations for the 2012 list â for species described in 2011 â may be made online at http://species.asu.edu/species-nomination.