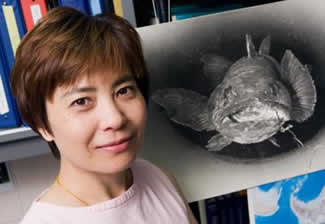 Christina Cheng, an animal biologist, poses with a photo of an Antarctic toothfish

URBANA-CHAMPAIGN, Illinois -- Thirty-five years ago Arthur DeVries of the University of Illinois at Urbana-Champaign first documented antifreeze glycoproteins (AFGPs) in Antarctic notothenioid fishes. This month three colleagues report they've solved the ensuing, long-running mystery of where these AFGPs, which allow the fish to survive in icy waters, are produced.

"Ever since the discovery of these antifreeze proteins, it was assumed they had to be produced in the liver, since the vertebrate liver is well known as a source of secreted plasma protein, so there was no reason to think otherwise," said Chi-Hing "Christina" C. Cheng, a professor of animal biology. "It turns out that the liver has no role in the freezing avoidance in these fishes at all."

Instead, antifreeze glycoproteins (AFGP) originate primarily from the exocrine pancreas and the stomach, say Cheng, Paul A. Cziko and Clive W. Evans in a paper appearing online this week ahead of regular publication in the Proceedings of the National Academy of Sciences.

Cziko is a research specialist at Illinois. Evans is a professor of molecular genetics and development at the University of Auckland in New Zealand.

The liver-synthesis mindset dominated earlier studies even though results appeared to be at odds, Cheng said. The first radioactive-tracer characterization of liver AFGP biosynthesis, in fact, suggested another source of production was possible. Later on, Northern-blot studies had shown very low expression levels of antifreeze messenger RNA in the liver, but this was inconsistent with high levels of production of the protein, the researchers noted.

Cheng and colleagues used Northern blots of total RNA from various tissues to hybridize with an AFGP gene probe. A clear picture of strong AFGP mRNA expression came into focus in the pancreatic tissues in all notothenioids tested. The use of cDNA cloning and sequencing showed that the mRNA all encode secreted AFGPs.

An RNA analysis from tissues of a single notothenioid unveiled the anterior portion of the stomach, next to the esophagus-stomach junction, as being the only other site with strong AFGP mRNA expression. Using antibodies, the researchers found the absence of liver synthesis and strong pancreas expression in newly hatched fish larvae and young juveniles.

The exocrine pancreas is the larger of the two parts that make up the pancreas. It consists of tubuloacinar glands that primarily manufacture and secrete digestive enzymes that break down food in the intestine so it can be absorbed.

In this case, AFGPs are secreted into the intestinal lumen where they protect the intestinal fluid from being frozen by ice crystals that come in with seawater and food. Internal fluids in notothenioids are about one-half as salty as seawater.

While seawater reaches its freezing point at –1.91 degrees Celsius, fish fluids freeze at about –1 degree Celsius. These species dwell in water that rarely rises above the freezing point and is regularly filled with ice crystals.

From the intestine, the AFGPs are, apparently, absorbed into the blood. This hypothesis is based on the near-identical composition and abundance of AFGPs found in the fish serum.

"In this comprehensive study, we confirm that the exocrine pancreas is the major AFGP synthesis site in Antarctic notothenioid fishes from hatching through adulthood, while the liver is AFGP-expression null in all life stages," the researchers conclude. "Because the notothenioids are confined to chronically icy Antarctic waters, and face high risks of ice inoculation from frequent seawater drinking, the evolution of AFGPs in these fishes was probably driven first and foremost by the need to prevent the hyposmotic intestinal fluid from freezing."

The researchers also studied a variety of fishes from Arctic waters that have liver expression of AFGPs, and found that all of them also express antifreeze in the pancreas.

The findings, they wrote, bring a new perspective to teleost freeze-avoidance physiology and "reveals that the long-held paradigm of hepatic-based AF synthesis and secretion is no longer universally applicable." Instead, pancreatic antifreeze expression is universal.