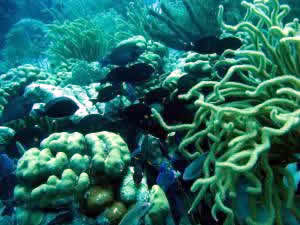 STATE COLLEGE, Pennsylvania -- The latest development in a major debate over a controversial hypothesis of biodiversity and species abundance is the subject of a paper to be published in the Nov. 1 issue of the journal Nature The authors report good agreement between the species richness of two of the world's most vulnerable ecosystems -- tropical forests and coral reefs -- and a simple mathematical model building on the so-called "neutral theory of biodiversity." "We're helping to refine and improve this theory because it might have important implications for the effort to protect terrestrial biodiversity from climate change and urban development," said Jayanth Banavar of the Department of Physics at Penn State, a member of the research team.

The Nature paper is based on a counterintuitive assumption of neutral theory: that one can largely ignore interactions between species in modeling patterns of species abundance. The authors are physicists Igor Volkov and Jayanth Banavar of Penn State, plant biologist Stephen Hubbell of UCLA (formerly of the University of Georgia), and physicist Amos Maritan of the University of Padua in Italy.

Among ecological theorists, neutral theory has sparked a six-year quarrel over the fundamental assumptions of their discipline. The Nature paper counters another scientific team's claim in 2006 that coral-reef diversity "refutes" the neutral theory. At the same time, the paper by Volkov et al., to be published on Nov. 1, modifies the classical version of neutral theory that appeared in a 2001 book by Hubbell. (Graham Bell of McGill University also developed a neutral theory independently of Hubbell.) Banavar, Maritan, Volkov and their collaborators have been active in the development of a mathematical framework for understanding ecosystems that builds on and clarifies Hubbell's neutral theory.

"Despite its controversial nature, neutral theory has proved to be a good starting point for understanding ecosystems," Maritan said. In a 2005 paper published in Nature, Banavar, Maritan, Volkov and their collaborators demonstrated that tree-species abundance and diversity in the tropical forests can be explained by the density-dependence mechanism, in which birth, death and migration processes are postulated to depend on the abundance of a species. In a Nature paper in 2006, they presented a theory for the time scales of neutral evolution that is in good accord with empirical data.

"Mathematical modeling is increasingly vital in the biological sciences, and the key challenge is to uncover the simplicity underlying the seemingly bewildering complexity," Banavar said. In recent years, theorists have struggled to reconcile neutral theory with more mainstream ecological models, such as the famous niche theory, according to which species survive by exploiting ecological "niches" to which they are uniquely and better adapted than other species. For example, a rare plant species might survive in a dense rainforest habitat by exploiting a peculiar soil composition for which it is genetically adapted. Niche theory seemed so commonsensical that many ecological theorists reacted fiercely when Hubbell published his hypothesis, because it implied that individual members of plant or animal species comprising a fixed total population could be modeled as if they were equivalent entities in a random evolutionary lottery influenced only by rates of birth, death and immigration.

In Hubbell's 2001 book, The Unified Neutral Theory of Biodiversity and Biogeography," he pointed to a surprising feature of some measurements of relative species abundance distributions (RSAs). The measurements are indistinguishable from fictional distribution curves generated by models based on random processes; that is, processes in which the fates of hypothetical species owe purely to chance events in birth, death and immigration rather than to their adaptive prowess. Of course, in real life, adaptation to niches is an obvious feature of living creatures. For example, polar bears are adapted to the chilly niche of the Arctic, not to the sultry niche of the tropics. Still, Hubbell's findings hinted that the abundance of species and the development of ecological communities and ecosystems owe more to chance processes, and less to biology, than previously had been assumed.

Since 2001, numerous researchers have published the results of field tests of Hubbell's theory, based on their analyses of life forms and habitats such as tropical forests, North American birds, tropical reef fishes and corals, marine benthic communities in intertidal zones, and pollen records of eastern North American during the Holocene. Test results have varied from strongly positive to strongly negative. Some groups have disagreed in their interpretations of the same data.

In March 2006, Maria Dornelas of James Cook University in Queensland, Australia, and her colleagues published in Nature their study of coral-reef communities in the Indian and Pacific oceans. They found the coral-reef species in various local communities differ from each other far more than expected by neutral theory, and they exhibit RSA patterns that are quite distinct from those of tropical forests. The Nature article was titled "Coral Reef Diversity Refutes the Neutral Theory of Biodiversity." In their new Nature article, Volkov et al. reply to this latest challenge by arguing that the Dornelas team's thesis is invalid because the spatial structure and degree of isolation of coral-reef communities is different from those of tropical forests. In their latest paper, Banavar, Maritan, Volkov, and their collaborators have reanalyzed the Dornelas dataset and have concluded that it and measurements of rainforest species are compatible with an extended version of neutral theory in which all species are equivalent and do not interact with each other or the environment. Their work shows that "a theory in which all interspecific interactions are turned off leads to analytical results that are in good agreement with RSA data from tropical forests and coral reefs," the Nature article said. This agreement is so despite the obvious differences between the two types of communities -- coral reefs being composed of "many small, isolated communities" and tropical rainforests being "larger and more connected."

Volkov et al. conclude that "one can make significant theoretical progress in ecology by assuming that the effective interactions are weak in the stationary states in species-rich communities such as tropical forests and coral reefs." Maritan said that ecosystems may have evolved to a stationary state in which the coexisting species are substantially noninteracting because that is the most probable outcome. The next step, Volkov said, is "the development of a framework for bridging neutral and niche theories through the realistic accounting of the most important interactions among species and with the environment; for example, ways in which tree species might compete for the same resources or harbor insect pests that affect their competitiveness with rival tree species."

"The six-year saga of neutral theory is an intriguing example of how a scientific hypothesis can fertilize stimulating new research while evolving over time in response to scientific critiques," Banavar said.