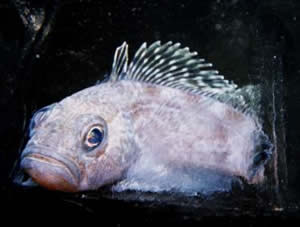 Trematomus hansoni hides from predators and waits for prey in a crevice in the ice. Photo by Christina Cheng and Kevin Hoefling 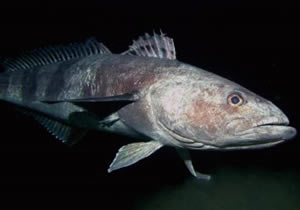 Dissostichus mawsoni, the Antarctic toothfish, is the largest of the notothenioid fish to inhabit the Southern Ocean. Photo by Chris Cheng

URBANA-CHAMPAIGN, Illinois -- A genetic study of a fish that lives in the icy waters off Antarctica sheds light on the adaptations that enable it to survive in one of the harshest environments on the planet.

The study, in the Proceedings of the National Academy of Sciences, is the first to search the genome of an Antarctic notothenioid fish for clues to its astounding hardiness.

There are eight families of notothenioid fish, and five of them inhabit the Southern Ocean, the frigid sea that encircles the Antarctic continent. These fish can withstand temperatures that would turn most fish to ice. Their ability to live in the cold – and oxygen-rich – extremes is so extraordinary that they make up more than 90 percent of the fish biomass of the Southern Ocean.

The researchers reasoned that any proteins that gave the fish an advantage in a cold, oxygen-rich environment would be expressed at high levels in the Antarctic fish. But it could also be true that specific tissues simply expressed more of certain proteins.

To get a better idea of whether the genes that were "upregulated" in D. mawsoni enhanced its survival in the Antarctic, the researchers compared gene expression in D. mawsoni and in the same tissues of several unrelated, warm-water fish. They found that most of the genes that were highly expressed in the Antarctic fish were not elevated in the warm-water fish.

When they analyzed the upregulated genes, the researchers found that many of them coded for proteins that respond to environmental stress. There were many chaperone proteins, including "heat shock proteins," for example, which protect other proteins from being damaged by stresses such as extreme cold (or heat).

University of Illinois animal biology professor Arthur DeVries discovered in the late 1960s that some notothenioids manufacture their own "antifreeze proteins." These proteins bind to ice crystals in the blood to prevent the fish from freezing.

In the new study, U. of I. animal biology professor C.-H. Christina Cheng and her colleagues at the Chinese Academy of Sciences sought comprehensive genetic clues that would help explain how the Antarctic notothenioids survive.

"Nobody has ever actually looked at the whole range of biological functions in these fish that are important for living in this chronically cold environment," Cheng said. "This is the first study that does that."

Cheng and her colleagues wanted to know which genes were being expressed (that is, translated into proteins) at high levels in one representative species of Antarctic notothenioid, Dissostichus mawsoni.

They analyzed gene expression in four tissues: the brain, liver, head kidney (the primary blood-forming organ in fish) and ovary of D. mawsoni.

"We saw this very peculiar profile where in each of these tissues the proteins that are highly expressed are from a small set of genes," Cheng said. "Each tissue makes all kinds of transcripts – the genetic messages that are made into proteins – but we found that a small group of genes dominates the transcriptional process."

Other proteins, called ubiquitins, were also expressed at higher levels in the Antarctic fish. Ubiquitins help maintain the health of cells and tissues by targeting damaged proteins for destruction.

"Many of the proteins that were upregulated in the Antarctic fish are involved in maintaining the integrity of functional proteins and cells in these fish," Cheng said.

"The many more copies of these genes in the Antarctic fish would empower greater transcription and provide more of the needed protein functions," Cheng said. "We have direct verification that these genes are indeed highly duplicated in the Antarctic species relative to their non-Antarctic cousins that have never seen cold water."

"If you have a drastic rise in the water temperature we don't know how well the Antarctic fish will adapt, whether they will die out or not," Cheng said. "And if they do, then the whole Antarctic food web will be drastically affected."