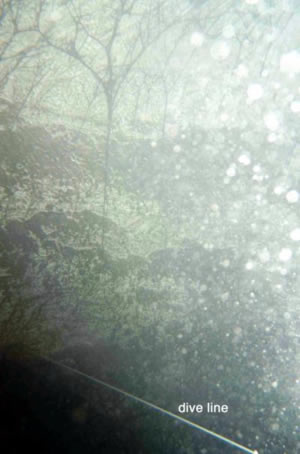 This image shows a microbial rope in the bottom half of the cave lake. credit Penn State.

UNIVERSITY PARK, Pennsylvania -- Deep inside the Frasassi cave system in Italy and more than 1,600 feet below the Earth's surface, divers found filamentous ropes of microbes growing in the cold water, according to a team of Penn State researchers.

In this process, Macalady and her team discovered a previously unknown form of biofilm growing in the oxygen-deficient portion of the lake.

"The cave explorers had seen these strange biofilms," says Macalady. "So we asked them if they could get us a sample."

The Frasassi cave system is located north of Rome and south of Venice in the Marche region. These limestone caves are like New Mexico's Carlsbad Caverns and Lechuguilla Cave, but in those caves, sulfur entered the caves from oil and gas reserves, while in Italy, the sulfur source is a thick gypsum layer below. Having sulfur in the environment allows sulfur-using organisms to grow.

The researchers received about the weight of two paper clips of the strange rope to analyze. They reported the results of their DNA sequencing today (Dec. 19) at the American Geophysical Union Conference in San Francisco.

The researchers did find that about half the organisms were bacteria and the other half belonged to another single-celled group of organisms called archaea. The researchers identified half the bacteria as sulfate reducers, bacteria that convert sulfates into sulfide to obtain energy. Of the archaea, more than half were associated with organisms usually found in deep sea sediments and referred to as marine benthic group D (MBG-D). Researchers do not know how MBG-D organisms obtain energy, although they are always found in oxygen-less locations.

The 2 inches of ropey biofilm under study was two-tenth of an inch in diameter. Microscopic images of the rope show that some of the single-celled organisms have shapes that intertwine with each other and some have tendrils.

"We do not know why the have the shape they do," says Macalady. "Microorganisms in them likely secrete some sticky goo, an extra-cellular polymeric substance -- slime that holds them together."

What the researchers do know is that the location where these ropes grow is very low in available energy -- considered an energy-limiting environment. The location can support only very slow growth. The ropes range in length from one to two meters, and radiocarbon dating places them at 1,000 to 2,000 years old.

"Previous researchers have estimated the rate of cell growth in some deep sea sediments to a cell division every thousand years," says Macalady.

Microscopic images of the rope using three dyes, one for DNA, one for bacteria and one for archaea, show very little activity in the bacteria or archaea, probably because the dyes highlight ribosomes and they only exist in a cell when it is actively metabolizing.

The researchers, who include Macalady; Daniel S. Jones and Rebecca R. McCauley, graduate students, geosciences; Irene Schaperdoth, research associate; and Dan Bloom, undergraduate honors student in astrobiology, are hoping to obtain more microbial rope samples this summer. They will work with divers to get samples from the deepest and shallowest ends of the ropes in order to find clues about how they grow.