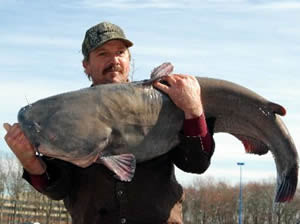 FORT WASHINGTON, Maryland -- Ron Lewis of Point of Rocks, Md. was fishing in the tidal Potomac River near Fort Washington on Sunday March 23 when he hooked and landed a new state record blue catfish. Ron who is an accomplished fisherman was targeting blue catfish, but the size of this particular fish caught him and his partner by surprise.

“When we brought the catfish alongside the boat we quickly realized that we needed a larger landing net; so we had to haul the fish into the boat by hand,” said Lewis.

Weighing in at an impressive 67.1 pounds and measuring 51 inches long, with a girth of 34.5 inches, Lewis’s catch broke the previous 65.5 pound state record blue catfish set by Josh Fitchett in 2006 in the same general area of the Potomac.

Fishing for blue catfish has quickly become a burgeoning trophy catch and release fishery in the tidal portion of the Potomac River and the anglers who fish for them have become a close knit union often sharing skills and tips.

The record blue catfish was kept alive and will reside in a public fish display at Bass Pro Shop in Arundel Mills Mall in Hanover, Md.