They're Back: Recent Otter Deaths A Reminder That Great White Sharks Are Patrolling California Waters

Groups File Petition For Endangered Status For California's Great White Sharks; 'There Must Be Action Taken' 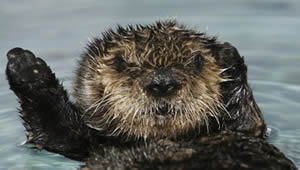 MONTEREY, California -- The likely deaths of two mother sea otters from shark bites, and the rescue of their orphaned pups in recent days is a reminder of what researchers have learned from a decade studying adult great white shark behavior:

These top ocean predators return to California's coastal waters each year at this time.

The Monterey Bay Aquarium's Sea Otter Research and Conservation program (SORAC; http://www.montereybayaquarium.org/cr/sorac.aspx) recently took in two sea otter pups, one from Cayucos (San Luis Obispo County) on August 12 and a second from Santa Cruz on August 17. In both cases, the mothers had suffered shark trauma â likely from great white sharks, according to biologists.

"The number of shark-bitten sea otter carcasses recovered by our California Sea Otter Stranding Network has increased in recent years â especially in the southern portion of the range," said Brian Hatfield of the U.S. Geological Survey (USGS). "This mortality is likely having a significant impact on the population."

In fact, the most recent sea otter census released by USGS earlier this month showed a continued downward trend in the number of both adults and pups in California.

In San Luis Obispo County a number of recent sea otter strandings have been associated with shark bites, and only one survived. That young female was transported to the aquarium on Aug. 12, and SORAC staff treated her for superficial bite wounds. A nursing female, presumed to be the mother, was found dead later the same day with severe shark trauma.

Just five days later, surfers off Pleasure Point, Santa Cruz reported a dead female otter with a pup that was loudly vocalizing. SORAC staff responded immediately, driving to Santa Cruz Harbor and launching a boat to retrieve the pair. The mother was confirmed dead, and the pup, a two-week-old male, was alive but face down in the water. As a result of fast action by members of the public, who alerted the aquarium, the pup is responding well to initial treatment and is recovering in the care of aquarium staff and volunteers.

Permanent homes are being sought for both young animals.

There have been numerous recent reports of shark sightings as far south as San Diego County, and two August reports by sea kayakers of encounters with adult great white sharks: on August 2 near Gaviota, Santa Barbara County and on August 14 near Pigeon Point, San Mateo County. Neither kayaker was injured.

August encounters with adult great whites are consistent with findings from a research team led by biologists from Stanford University's Hopkins Marine Station. By placing electronic tracking tags on 179 sharks since 2000, they've documented that adult great whites congregate near sea lion and elephant seal breeding colonies in Central and Northern California between August and February. The sharks then migrate offshore as far west as Hawaii before returning to precisely the same coastal feeding grounds a year later.

The findings were published in November 2009 in the scientific journal Proceedings of the Royal Society B, http://news.stanford.edu/pr/2009/pr-white-shark-research-110309.html.

Steps to follow if you come across a sea otter you think is ill, injured or abandoned:

-Don't touch it or try to catch itâdoing so is illegal, and sea otters can bite.

-Keep people and pets away from the otter. Don't wrap a stranded otter in a blanket; it will overheat very quickly.

-Call to report a sea otter in distress. Wildlife specialists will respond and determine whether the otter needs help. If it does, they'll capture it and take it in for care. 4. To report a stranded otter, contact one of the following agencies: In Central California, Monterey Bay Aquarium sea otter 24-hour emergency line (831-648-4840); statewide, The Marine Mammal Center (415-289-7325).