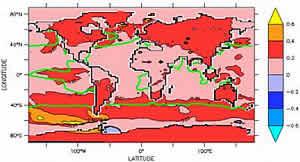 SOUTHAMPTON, UK -- Pumping nutrient-rich water up from the deep ocean to boost algal growth in sunlit surface waters and draw carbon dioxide down from the atmosphere has been touted as a way of ameliorating global warming. However, a new study led by Professor Andreas Oschlies of the Leibniz Institute of Marine Sciences (IFM-GEOMAR) in Kiel, Germany, pours cold water on the idea.

"Computer simulations show that climatic benefits of the proposed geo-engineering scheme would be modest, with the potential to exacerbate global warming should it fail," said study co-author Dr Andrew Yool of the National Oceanography Centre, Southampton (NOCS).

If international governmental policies fail to reduce emissions of carbon dioxide to levels needed to keep the impacts of human-induced climate change within acceptable limits it may necessary to move to 'Plan B'. This could involve the implementation of one or more large-scale geo-engineering schemes proposed for reducing the carbon dioxide increase in the atmosphere.

One possible approach is to engineer the oceans to facilitate the long-term sequestration of carbon dioxide from the atmosphere. It has been suggested that this could be done by pumping of nutrient-rich water from a depth of several hundred metres to fertilize the growth of phytoplankton, the tiny marine algae that dominate biological production in surface waters.

The aim would be to mimic the effects of natural ocean upwelling and increase drawdown of atmospheric carbon dioxide by phytoplankton through the process of photosynthesis. Some of the sequestered carbon would be exported to the deep ocean when phytoplankton die and sink, effectively removing it from the system for hundreds or thousands of years.

A previous study, of which Yool was lead author, used an ocean general circulation model to conclude that literally hundreds of millions of pipes would be required to make a significant impact on global warming. But even if the technical and logistical difficulties of deploying the vast numbers of pipes could be overcome, exactly how much carbon dioxide could in principle be sequestered, and at what risk?

In the new study, the researchers address such questions using a more integrated model of the whole Earth system. The simulations show that, under most optimistic assumptions, three gigatons of carbon dioxide per year could be captured. This is under a tenth of the annual anthropogenic carbon dioxide emissions, which currently stand at 36 gigatons per year. A gigaton is a million million kilograms.

One surprising feature of the simulations was that the main effect occurred on land rather than the ocean. Cold water pumped to the surface cooled the atmosphere and the land surface, slowing the decomposition of organic material in soil, and ultimately resulting in about 80 per cent of the carbon dioxide sequestered being stored on land. "This remote and distributed carbon sequestration would make monitoring and verification particularly challenging," write the researchers.

More significantly, when the simulated pumps were turned off, the atmospheric carbon dioxide levels and surface temperatures rose rapidly to levels even higher than in the control simulation without artificial pumps. This finding suggests that there would be extra environmental costs to the scheme should it ever need to be turned off for unanticipated reasons.

"All models make assumptions and there remain many uncertainties, but based on our findings it is hard to see the use of artificial pumps to boost surface production as being a viable way of tackling global warming," said Yool.