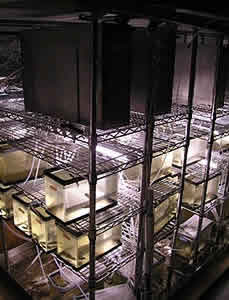 BOULDER, Colorado -- Male fish are taking longer to be "feminized" by chemical contaminants that act as hormone disrupters in Colorado's Boulder Creek following the upgrade of a wastewater treatment plant in Boulder in 2008, according to a new study led by the University of Colorado at Boulder.

But the problem of fish feminization -- which causes males to develop characteristics of females and to decline in numbers -- is a global one that is growing as a result of increasing chemicals like natural human reproductive steroids, pharmaceuticals, cosmetics, shampoos and soaps making their way into waterways, said CU-Boulder Professor David Norris, who led the study.

Norris, a professor of integrative physiology at CU-Boulder, said the multimillion-dollar general upgrade of the Boulder Wastewater Treatment plant northeast of Boulder, Colo., designed to solve multiple problems has had a dramatic effect on delaying symptoms of male fish feminization. The team compared fish populations below the wastewater treatment plant on Boulder Creek in 2006 before it had upgraded and again after the upgrade had been completed.

In the 2006 study Norris and his colleagues used a mobile fish exposure facility situated on Boulder Creek northeast of Boulder that collected both water from upstream of the plant and effluent water directly from the treatment plant. After exposure to equal parts of effluent and upstream water for only seven days, adult male fathead minnows became feminized, looking and acting like females and showing elevated levels of a protein known as vitellogenin that is normally produced by females.

Contaminants identified in Boulder Creek included ethinylestradiol -- a chemical used in most contraceptives -- as well as other reproductive steroids produced naturally by humans. Estrogen-related chemicals found in the water included bisphenyl A and phthalates associated with plastic, nonylphenols associated with detergents, and pesticides. Most of the compounds came from products flushed down toilets and drains, according to Norris.

In the new study following the treatment plant upgrade, the team studied adult male fathead minnows in 100 percent effluent water, those in a mixture of half effluent and half upstream water, and those in tanks containing all upstream water. Norris and his team saw no effects on male sex characteristics of the minnows in the tank containing 100 percent effluent water directly from the treatment plant until 28 days after exposure.

As part of the study, Norris and his colleagues also analyzed reproductive organs from preserved fish specimens from CU's Museum of Natural History that had been collected from Boulder Creek between 50 and 100 years ago. The researchers and found no evidence of feminized or intersex fish in the museum specimens, he said.

In addition to chemicals that trigger fish feminization, biologists are finding increased concentrations of fluoxetine, a common antidepressant taken by millions of Americans, in waterways across the nation, said Norris. Fluoxetine has been shown to enter the brains of fish and affect fish behavior, said Norris.

Between 2000 and 2002, Norris and his group were among the first in the nation to document the problem of intersex fish following their stream surveys of Boulder Creek, the South Platte River near Denver and Fountain Creek near Colorado Springs in 2000. The researchers found feminized fish at all of the sites and as well as skewed sex ratios showing there were more females than males. Since that time biologists have been reporting feminized male fish and intersex fish in waterways across the globe.

"I look at the problem of fish feminization in waterways as a canary in a mine shaft," said Norris. "This is not the problem of water treatment plants, it's our problem as human beings. We excrete natural and synthetic estrogens and use shampoos, detergents and cosmetics containing a variety of hormone disrupters that wind up in waterways. All of these different chemicals we are putting into the environment have the potential to alter the biology of animals and to affect ecosystems."

It boils down to a growing human population problem, he said. Ways to mitigate effects of chemicals include using reduced amounts of detergents and shampoos. Another way people can lessen the problem is to avoid antibacterial soaps, which can disrupt thyroid function in fish.

"People have shown they can consciously mitigate some of these issues," said Norris. "One example is the refusal of some to buy milk from cattle that contain growth hormones."

He said the bulk of all pharmaceuticals people ingest generally wind up in urine and feces within 24 hours and are flushed or drained into treatment plants. In addition, chemicals from plastics and canned food can pass through humans and travel into waterways, affecting fish populations as well as the health of people. "Our bodies are being exposed every day to a variety of chemicals capable of altering our physiological development, including impacts on sensitive human fetuses."

The research was supported by grants from the Environmental Protection Agency and the city of Boulder. The next step of the team will be to re-survey some of Colorado waterways using a grant from the National Science Foundation.

A mobile fish lab on Boulder Creek is helping researcher assess the health of fish exposed to endocrine-disrupting chemicals polluting the waterway that can cause male fish to be feminized and decline in numbers. Image courtesy Alan Vajda, University of Colorado Denver.