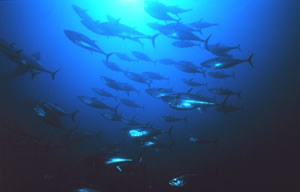 Despite a strong U.S. proposal to conserve bluefin tuna in the eastern Atlantic and Mediterranean, the International Commission for the Conservation of Atlantic Tunas failed today to heed scientific advice and adopt measures that would end overfishing and put this species on the path to recovery.

However, the commission adopted a strong measure, championed by the United States, to rebuild the western Atlantic bluefin tuna stock, the stock harvested by U.S. fishermen. The catch level for the western Atlantic stock was reduced from 2,100 metric tons to 1,800 metric tons by the year 2010. This stock is also fished by Canada, Mexico, and Japan.

The much larger eastern and Mediterranean stock mixes with the western stock. Conservation of the species depends on science based management and effective compliance with the rules on both sides of the ocean.

The U.S. delegation to the meeting in Marrakech, Morocco, urged the international body of 45 nations and the European Commission to cut catch levels for the much larger eastern and Mediterranean bluefin tuna stock from about 29,000 metric tons to 15,000 metric tons to comply with what an international panel of scientists have recommended to end overfishing and allow the stock to recover.

“I am extremely disappointed with the results of this meeting,” said Dr. Rebecca Lent, the head of the U.S. Delegation and director of International Affairs at NOAA’s Fisheries Service. “While the Commission followed the recommendation to reduce catch levels for the western stock consistent with the science, it continues to put the species as a whole in jeopardy by authorizing excessive fishing levels on the eastern stock.”

Although the final measure for eastern Atlantic and Mediterranean bluefin tuna fails to fully achieve U.S. objectives, the plan that was adopted by the Commission will reduce mortality and improve monitoring and control of the fishery through new reporting requirements, measures that seek to reduce overcapacity and rationalize the fishery, and establishment of an ICCAT regional observer program.

The United States met a major meeting objective to extend, for an additional year, strong management measures for North Atlantic swordfish. This will provide additional time to revitalize the swordfish stock and allow any new management measures to be based on the most recent stock assessment, which will be completed in 2009. In addition, a commitment was secured to analyze and implement fishing closures to protect juvenile bigeye tuna by 2010, pending scientific advice.

The Commission also took up several shark conservation proposals. With U.S. support, a measure was adopted that would require live release of bigeye thresher sharks, a species that is the most vulnerable of the top 10 species of concern that were evaluated by the international commission’s