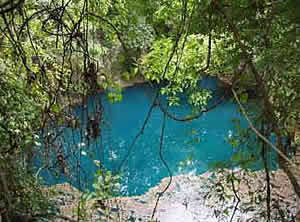 The cenotes of central Belize vary in size, depth and accessibility. Photo by Lisa Lucero, University of Illinois

CHAMPAIGN, Illinois -- A team of expert divers, a geochemist and an archaeologist will be the first to explore the sacred pools of the southern Maya lowlands in rural Belize. The expedition, made possible with a grant from the National Geographic Society and led by a University of Illinois archaeologist, will investigate the cultural significance and environmental history and condition of three of the 23 pools of Cara Blanca, in central Belize.

Called cenotes (sen-OH-tays), these groundwater-filled sinkholes in the limestone bedrock were treated as sacred sites by the Maya, said University of Illinois archaeologist Lisa Lucero, who will lead the expedition next spring.

"Any openings in the earth were considered portals to the underworld, into which the ancient Maya left offerings," said Lucero, who is a professor of anthropology at Illinois. "We know from ethnographic accounts that Maya collected sacred water from these sacred places, mostly from caves."

Studies of shallow lakes and cenotes in Mexico and Guatemala have found that the Maya also left elaborate offerings in the sacred lakes and pools. Items found on the bottom of lakes in these regions include masks, bells, jade, human remains, figurines and ceramic vessels decorated with animals, plants and the gods of fertility and death.

"Diving the sacred pools of Cara Blanca, in central Belize, is necessary to determine if they have similar sacred qualities," Lucero said.

Patricia Beddows, a lecturer of earth and planetary sciences at Northwestern University and an expert diver who has explored cenotes on the Yucatan Peninsula of Mexico, will also explore the geochemistry and hydrology of the pools of central Belize.

"Once underwater, we will first have to cut out some of the jungle wood so that we can even reach the bottom," Beddows said. "After mapping for fragile Maya artifacts, we will also take water data and manually drill sediment cores."

The sediment samples will provide a record of changes in surface and water conditions, Beddows said.

"Were the Maya challenged by droughts in the area? Did the water quality suddenly go bad due to sulfur or other geologic factors? We hope these cenotes will provide a rich story of linked human and environmental conditions," she said.

The cenotes vary in depth from 5 to more than 50 meters, Lucero said. The extraordinary depth of some of the pools, their sheer walls, the probable presence of underwater caves that may lead to other pools and the potential for encountering wildlife (a crocodile was spotted in one of the cenotes the team will explore) all add to the complexity and danger of the task, she said. But the team will include some of the most accomplished technical divers in the world and will be in radio contact with British special forces, who train in the region, to coordinate a medical evacuation in the event of a health emergency.

The divers will videotape and map the pools and any artifacts they find.

One of the three pools the researchers will explore has a substantial Maya structure on its edge, likely ceremonial. Preliminary investigations of the structure conducted by archaeologist Andrew Kinkella, of Moorpark College, turned up a lot of jars and the fragments of jars. This could indicate that the site was important for collecting sacred water, Lucero said. She plans to conduct a limited analysis of the structure while the divers explore the pools. Kinkella will join Lucero's team, and will search the sheer walls of the cenotes for niches, like those carved by the Maya in other pools, where artifacts were deposited.

Lucero has spent more than 20 years studying settlements and sacred sites that were important to the Maya in Belize, and works under the auspices of the Institute of Archeology, which is part of the National Institute of Culture and History, Government of Belize.