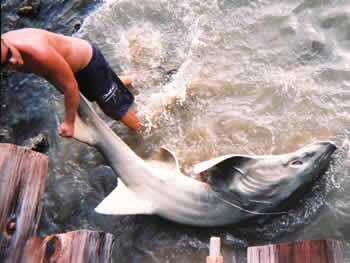 Eugene "Snook Dawg" Hoffer with the great beast he rescued

DESOTO, Florida -- Keiko the killer whale isn't the only sea creature that gets to live free.

DeSoto resident Eugene "Snook Dawg" Hoffer, 23, recently did his good deed for the day when he rescued a shark trapped in fishing lines.

Bonnie said today that Eugene was fishing with his grandparents, Eugene Sr. and Beverly Hoffer, at the Placida pier between Boca Grande and El Jobean.

Using only a 50-pound test line with no leader, Eugene fought the 9 1/2-foot shark for a good half-hour and wrangled it into shallow water to release it. The shark had monofiliament wrapped around his tail fin and a 200-pound test stainless steel leader wrapped just below its head, tight enough to cut into its skin from attempts by others to catch it.

Once caught, "amazingly he laid very still to allow Eugene to remove the tangled mess from him," Bonnie said. "Grandpa and Grandpa watched in amazement and disbelief that the fish wasn't thrashing around and let Eugene put his arms underneath his belly to unravel the leader. After freeing him, Eugene gently pushed him back into the water and watched him swim away."

Bonnie said Eugene has been fishing ever since he was able to hold a fishing pole.

"His favorite fish is, of course, the snook," hence the nickname Snook Dawg was born, she said.

Bonnie contacted Mote Marine Laboratory in Sarasota to find out the species of the shark, which she said looked like a cross between a manta ray and a shark.

The lab referred her the Fish and Wildlife Conservation Commission, but she had not received a response yet.