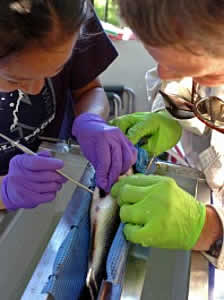 In a lakewide study, a team of scientists lead by University of Nevada, Reno limnologist Sudeep Chandra has found a considerable decline in native fish species density at Lake Tahoe since 1951. In their final report, they are recommending establishing and implementing a management plan to protect the nearshore zone habitat, which is critical to native fish.

"The numbers are alarming, and likely caused by multiple stressors in the nearshore zone," Chandra an assistant professor in the University's Department of Natural Resources and Environment said. "The good news is that the composition is there. The bad news is the decline in number, the decline in native species and the proliferation of non-native fish species."

The Lake Tahoe aquatic ecosystem is impacted by the stressors of nutrient loading, algae growth, invasive species, and habitat alterations, Chandra said. In particular, the nearshore area is of critical concern since it is heavily influenced by human disturbances and is the primary interface with the general public, and it's also the area where fish spawn and develop into adulthood.

Chandra's study found that 58 percent of the 26 historically sampled locations surveyed around the lake showed a decline of species or no native species at all.

Several species of nonnative coldwater sport fish, such as Mackinaw, rainbow, brown and brook trout, have been intentionally introduced to Lake Tahoe to provide and support recreational sport fishing. The Kokanee salmon that run up Taylor Creek at the south end of the lake every fall were introduced to Tahoe in the 1940s. Mackinaw trout, brought here from Michigan in 1894, contributed to the extinction of Tahoe's native Lahontan cutthroat trout in 1939.

For the study, the team focused on the nonnative warmwater fish species bluegill and largemouth bass, both illegally introduced into the lake. By the end of the 1990s, nonnative largemouth bass and bluegill were common in the Tahoe Keys, while native Lahontan redside shiner and speckled dace populations declined or were virtually eliminated from the Tahoe Keys, at the south end of the lake, an important rearing ground for native fish.

"Our knowledge of Lake Tahoe's nearshore fishery is very limited. There have only been a few sporadic assessments and documentaries of the nearshore fishery in the past 60 years, and no studies were conducted in the last 20 years after the establishment of invasive, warmwater fishes," Ka Lai Ngai, a researcher in the University's Department of Natural Resources and Environment said.

This knowledge gap stimulated the process of conducting a contemporary assessment and developing ecologically relevant metrics to assess the nearshore fishery. Chandra proposes one of those metrics be ultraviolet radiation exposure, and a new TRPA threshold be developed for it, the Ultraviolet Attainment Threshold. The UVAT is a target value for water clarity based on surface UV exposure during peak spawning season, and experimentally derived UV exposure levels lethal to larval warmwater fish.

"We've found that decreased ultraviolet radiation is one of the major factors in the changes that make it easier for invasive species to proliferate, including fish, plants and mollusks," Chandra said.

Tahoe watchers are accustomed to hearing about clarity of the water, and it's decline, and UV radiation penetration is affected by clarity. In Lake Tahoe the average annual Secchi transparency dropped from 102 feet in 1968 to 69 feet by 1998. The summer 2010 Secchi reading was 68 feet. During this same time a number of nonnative warmwater fish species became established in portions of the lake suggesting that decrease in water transparency may create a refuge for nonnative species that are less sensitive to the optical properties of water such as ultraviolet radiation.

To get a more objective, quantifiable measure, and rather than rely on the secchi dish invented in 1865, as a means for measuring clarity or turbidity, members of Chandra's team from Miami University in Ohio used a UV radiometer to measure the intensity of the light in the nearshore zone at 28 locations. Eleven of those nearshore sites were identified as having a high potential for improvement, so Chandra and his team propose that TRPA and other agencies concentrate efforts there first with the goal of threshold attainment.

Further study found that non-native fish indeed have a lower tolerance to ultraviolet radiation, enabling them to survive in the nearshore areas where clarity is degraded in comparison to the majority of the lake where UV transparency is high, making it undesirable for nonnative fish.

"We proposed that this differential UV sensitivity could be used to develop a "UV Threshold" that could be attained to minimize susceptibility to aquatic invaders," Chandra said. "This value can be easily measured and monitored with a profiling UV radiometer or modeled from water samples analyzed for transparency in the lab with a spectrophotometer, and used to manage nearshore waters."

"We hope that our recommendations will assist in preserving nearshore native fish populations, increasing the cost effectiveness of eradication efforts of invasive warmwater species, and inform mitigation efforts to increase water clarity at compromised sites around Lake Tahoe," Chandra reported in his presentation to Nevada Division of State Lands and the PSW. "Given the potentially high cost of a full scale warmwater fish invasion any expense to implement these largely preventative measures is money well spent."

Chandra and his team completed the "Nearshore Indicators for Clarity, Habitat and Ecological Sustainability; Development of Nearshore Fish Indicators for Lake Tahoe" study for the Pacific Southwest Research Station of the USDA Forest Service and the Nevada State Lands Division, both of which funded the research.