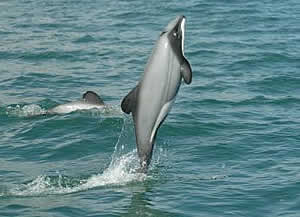 Ecologists in New Zealand have shown for the first time that Marine Protected Areas – long advocated as a way of protecting threatened marine mammals – actually work. Their study, based on 21 years' monitoring and published today in the British Ecological Society's Journal of Applied Ecology, reveals that a marine sanctuary off the coast of Christchurch has significantly improved survival of Hector's dolphins – one of the rarest dolphins in the world.

Covering 1170 km2 of sea off New Zealand's South Island, Banks Peninsula Marine Mammal Sanctuary was designated in 1988 to prevent the dolphins being killed by gillnet and trawl fisheries.

Over 21 years between 1986 and 2006, researchers conducted regular photo-identification surveys of Hector's dolphins, photographically capturing 462 reliably-marked individuals, whose survival they studied.

According to one of the team, Dr Liz Slooten of the University of Otago: "We can identify individual dolphins from their battle scars – which range from small nicks out of the dorsal fin to major scarring following shark attacks."

The team analysed the photographic re-sightings using a so-called Bayesian mark-recapture technique and then used a population model to assess the impact of the Marine Protected Area (MPA) on Hector's dolphins.

The results showed that since the MPA was designated, the dolphin's survival has increased by 5.4%. According to Dr Slooten: "This study provides the first empirical evidence that Marine Protected Areas are effective in protecting threatened marine mammals."

But she warns that while survival has improved significantly, it is not yet high enough to prevent the population from continuing to decline.

MPAs, in which certain fishing methods are banned or restricted, are often used to help conserve marine mammals. Until now, there has been little if any empirical evidence of their effectiveness, so measuring their impact is crucial to justify setting up MPAs.

As well as providing the first hard evidence that MPAs work, the study illustrates the importance of long-term ecological monitoring, as Dr Slooten explains: "Estimating population changes in marine mammals is challenging, often requiring many years of research to produce data accurate enough to detect these kinds of biological changes."

The study also shows that to be effective, MPAs need to be sufficiently large. "The take home message is that size matters. Marine Protected Areas work, but they have to be large enough in order to be effective," she concludes.