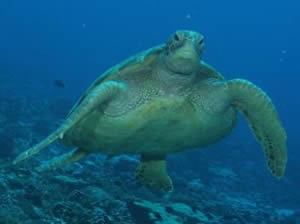 NEW YORK, New York -- It's confirmed: Even though flatback turtles dine on fish, shrimp, and mollusks, they are closely related to primarily herbivorous green sea turtles. New genetic research carried out by Eugenia Naro-Maciel, a Marine Biodiversity Scientist at the Center for Biodiversity and Conservation at the American Museum of Natural History, and colleagues clarifies our understanding of the evolutionary relationships among all seven sea turtle species.

Naro-Maciel and colleagues used five nuclear DNA markers and two mitochondrial markers to test the evolutionary relationships of all species of marine turtles—leatherback, flatback, green, hawksbill, loggerhead, Kemp's Ridley, and Olive Ridley—and four 'outgroups,' or more distantly related animals. The results formed a well-supported phylogenetic tree, or cladogram, that tells the story of sea turtle evolution and is reported in the journal Molecular Phylogenetics and Evolution.

"The evolution of a specialized diet appears to have occurred three times, independently," says Naro-Maciel. "Many sea turtles are carnivorous generalists. However, hawksbills tend to have a diet of glass—they eat toxic sponges—while the leatherback consumes jellyfish and the green grazes mainly on algae or sea grass." Each of the species with specialized diets is positioned uniquely in the evolutionary tree.

Naro-Maciel and colleagues confirmed that one major group of sea turtles includes sister species flatback and green turtles (one carnivorous and the other herbivorous), while another clade is formed by the hawksbill, loggerhead, Kemp's Ridley and Olive Ridley turtles. The leatherback is confirmed as the most basal of all the sea turtles, and the Eastern Pacific green turtle—thought by some to be a separate species—falls within the green turtle species. The branches of this evolutionary tree can be calibrated with time using the new phylogeny and DNA data: Even though the ancestor of all sea turtles arose over 100 million years ago, the separation between the flatback and green turtles happened about 34 million years ago.

Determining the evolutionary relationships among sea turtles as well as the species identity of different populations of this highly migratory group of animals has implications for conservation. All sea turtles are included on the IUCN's Red List of Threatened Species, some of them as critically endangered, and an accurate understanding of this highly migratory group is important.

"These research results are another example of the importance of using systematics and taxonomy as a way to prioritize conservation efforts and strategies," says George Amato, Director of the Sackler Institute for Comparative Genomics at the Museum and an author of the article. "Only with these detailed studies can we better conserve the naturally occurring evolutionary novelty and patterns of genetic diversity for endangered species."