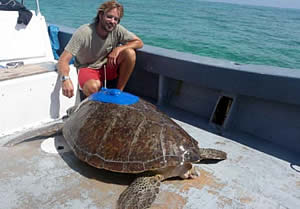 EXETER, UK -- University of Exeter scientists are part of the first team to monitor a sea turtle’s journey from the Turks and Caicos Islands.

She has visited three UK Overseas Territories in the Caribbean since her 900km journey, which began in September.

Dr Annette Broderick and NERC-funded PhD student, Tom Stringell, both based in the School of Biosciences on the University's Cornwall Campus, worked with scientists from the Marine Conservation Society and local agencies on this groundbreaking project.

Suzie was fitted with the tag in the Turks and Caicos Islands (TCI) at the end of June earlier this year, after being bought from a fisherman. After being tagged and released, she spent two months in TCI waters, but started migrating on the 1 September, swimming over 820 km straight to the British Virgin Islands (BVI). Then, after a week in BVI, Suzie migrated over 120 km, arriving on 28 September in the waters of Anguilla, her third consecutive UK Overseas Territory.

Dr Annette Broderick of the University of Exeter said: “Suzie’s trip so far has been amazing. By showing that she has moved from one UK territory to the next we have highlighted the importance of international co-operation for the conservation of migratory animals such as marine turtles. The fact that Suzie was captured by fishermen and destined for the pot shows the need to gather more information on these populations.

“Tracking sea turtles not only informs conservation management, but is a great educational tool. Before her release Suzie visited local school children and they are now following her progress on the web.”

“Suzie’s journey is a remarkable first. She was the first turtle ever to be fitted with a satellite tag in the Turks and Caicos Islands, and her journey has told us for the first time that three of the UK Overseas Territories in the Caribbean, hundreds of kilometres apart, share green turtle populations,” said Peter Richardson, MCS Biodiversity Programme Manager.

“We would never have predicted that she would visit three UK Territories in a row without stopping at any of the other countries on the way. Suzie has revealed that each of these Territories has a responsibility to look after their shared turtle resource.”

The tag was fitted onto Suzie’s shell by the Turks and Caicos Islands Turtle Project, a collaborative initiative between the Marine Conservation Society (MCS) and the University of Exeter's Marine Turtle Research Group, and the Department of Environment and Coastal Resources (DECR) and the School for Field Studies (SFS) in TCI. The project is carrying out research into the turtle populations and turtle fishery in the Turks and Caicos Islands (TCI), and the satellite tagging work aims to reveal the full ranges of the turtle populations found there.

Suzie's tag only transmits when she surfaces to breath, and satellites orbiting in space receive the signals and calculate her location. The Turks and Caicos Islands Turtle Project team hope to tag a total of six turtles in TCI and will track their migrations remotely via the internet using SEATURTLE.ORG's ground-breaking programme known as STAT. STAT communicates with the satellite system to plot online maps of the turtles movements each day.

The satellite tags used by the Turks and Caicos Islands Turtle Project were funded by People’s Trust for Endangered Species and the British Chelonia Group.