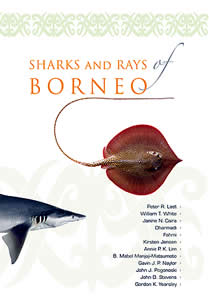 The cover of Sharks and rays of Borneo 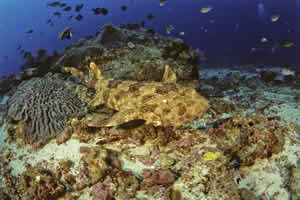 The Indonesian Wobbegong, a new species recently described by CSIRO scientists, is included in the Sharks and Rays of Borneo.

VICTORIA, Australia -- Which island of South-East Asia has the most stingray species in the world? According to the new book Sharks and Rays of Borneo, the island of Borneo has 30 different stingrays: not surprising for the most biologically diverse region on the planet.

Dr Peter Last and Dr William White from the CSIRO Wealth from Oceans Flagship and the Australian National Fish Collection are the book's lead authors.

"Borneo has a rich variety of aquatic habitats ranging from coastal estuaries and coral reefs to the deep ocean," Dr Last says.

"This diverse geography is reflected in Sharks and Rays of Borneo, the first comprehensive guide to Borneo's sharks and rays and the culmination of a decade of collaborative research by Australian, United States, Indonesian and Malaysian scientists.

"Thousands of specimens were collected and examined for the book, from ports and fish markets across Sabah, Kalimantan and Sarawak, and from fishing vessels and research voyages.

Sharks and Rays of Borneo describes the features, distribution, local names, habitat, biology and conservation status of 118 shark and ray species."The information will help meet the critical need for accurate identification to aid the conservation and management of this most vulnerable group of fishes."

It includes nine new species, including the Borneo River Shark and the Narrowtail Stingray, and three others not formally recorded for more than a century.

One of these 'resurrected' species, the Borneo Shark, is listed by the IUCN as Critically Endangered, a82nd was thought to be extinct.

"Learning more about Borneo's sharks and rays has helped to put Australia's shark and ray fauna in context with the Asian region and supports the long-held belief that we have a high level of endemism," Dr White says.

"It also provided an opportunity to share our expertise in fish taxonomy with colleagues in Indonesia and Malaysia.

"Many of Borneo's shark and ray species are endangered or conservation dependent, so it is important to build the local knowledge."

The Borneo project builds on knowledge gained from other projects in the South-east Asian region, including the Philippines and Indonesia, and ran in collaboration with a major study of the parasites of sharks and rays.

The field research, species classification and related publications were funded by the US National Science Foundation and CSIRO.

DNA sequencing conducted during the project will contribute to a global database against which new shark and ray records can be compared.

Sharks and Rays of Borneo will be launched during the Sharks International Conference being held in Cairns from 7â11 June.