Tiny 'Alien' Catfish With Bulldog Snout Defies Classification; 'It Continues To Be A Puzzle'

Study: One-third Of World's Fish Catches Are Being Wasted As Animal Feed; 'It Defies Reason' 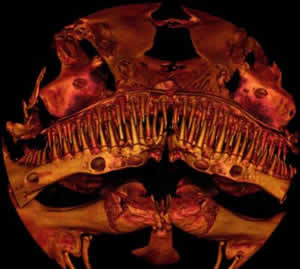 A close-up scanned image of the bony structures in the face of Kryptoglanis shajii. credit Academy of Natural Sciences of Drexel University

, Philadelphia, Penns -- Kryptoglanis shajii is a strange fish -- and the closer scientists look, the stranger it gets. This small subterranean catfish sees the light of day and human observers only rarely, when it turns up in springs, wells and flooded rice paddies in the Western Ghats mountain region of Kerala, India. It was first described as a new species in 2011. Soon after that, John Lundberg, PhD, one of the world's leading authorities on catfishes, started taking a closer look at several specimens.

"The more we looked at the skeleton, the stranger it got,"said Lundberg, emeritus curator of Ichthyology at the Academy of Natural Sciences of Drexel University and emeritus professor at Drexel in the College of Arts and Sciences. His team's study describing the detailed bone structure of Kryptoglanis is now published in the 2014 issue of the Proceedings of the Academy of Natural Sciences of Philadelphia.

"The characteristics of this animal are just so different that we have a hard time fitting it into the family tree of catfishes," said Lundberg.

From the outside, Kryptoglanis does not look particularly unusual for a catfish. But when Lundberg and his colleagues looked at its bones using digital radiography and high-definition CAT scans, they found some surprises.

Kryptoglanis was missing several bony elements -- a characteristic fairly common for subterranean fish. But there were also changes in the shapes of certain bones, changes so strange that Lundberg described them as "completely unique among catfishes and all fishes as far as I know."

Above: A specimen of Kryptoglanis shajii that was scanned in Lundberg's team's study. Credit: Kyle Luckenbill, Academy of Natural Sciences of Drexel University

Numerous individual bones were modified in the face, giving the fish a compressed front end with a jutting lower jaw -- like a bulldog's snout, if a bulldog also had four rows of conical, sharp-tipped teeth.

Lateral view of the head of a living Kryptoglanis shajii to show the projecting lower jaw. Credit: Moncey Vincent and John Thomas and The Ichthyological Society of Japan Posted with permission. To request permission to use this image elsewhere, contact Toshio Kawai, Secretary, The Ichthyological Society of Japan, kawai@museum.hokudai.ac.jp or +81-138-40-5553

Multiple changes piled up in one part of the body could mean there is a functional purpose for those changes. "In dogs that was the result of selective breeding. In Kryptoglanis, we don't know yet what in their natural evolution would have led to this modified shape," Lundberg said.

Based on its teeth and subterranean home, Lundberg said that Kryptoglanis most likely eats meat, in the form of small invertebrates and insect larvae -- whatever might be found in the groundwater and could be captured by the fish, which at less than ten centimeters is smaller than an adult human's pinkie finger. The fish can move swiftly in its environment, as evidenced by video footage of collected fish darting through water to grab food. [Source]

But why Kryptoglanis is so different, and what its closest relatives are, remains a mystery.

At the same time, a separate team led by Ralf Britz at the Natural History Museum of London independently examined the bone structure of Kryptoglanis using a technique of visualizing the skeleton called clearing and staining -- a chemical method in which the fish's soft tissues are rendered as clear as glass and bones and cartilage are stained in contrasting colors. This team's description of the structures was published in the March 2014 issue of the journal Ichthyological Exploration of Freshwaters.

"There was an amazing congruence between the results," Lundberg said. "Neither of us was way out."

Neither could figure out which other catfishes Kryptoglanis was most closely related to, although Britz's team chose to assign it to its own new taxonomic family within the order of catfishes.

This fish just one of many unresolved branches on the catfish family tree, in a section where even DNA evidence has thus far proven unhelpful. Subterranean species like Kryptoglanis tend to have dramatically different DNA sequences from one another and from their open-water relatives, making it difficult to identify their evolutionary histories.

"It continues to be a puzzle," Lundberg said.

Video visualization of the fish's internal bony structures is available at http://youtu.be/PBqndwVdnrc.