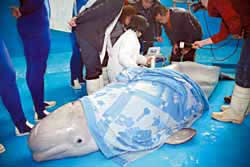 The 5-year-old white whale, in Qingdao Polar Ocean World, suffers from pus-filled lumps on her body and ulcerations on her tail.

QINGDAO, China -- Veterinarians who sometimes have trouble diagnosing diseases because their patients can't talk have never had a problem this big.

Two pus-filled lumps each 5 centimeters in diameter on her body and ulcerations on her tail fins have made Tina suffer every day for more than a month. She has been in low spirits and has no appetite, according to the theme park's animal keepers.

"We are making every effort to cure her, though we have no such experience," said Liu Zhenguo, deputy general manager of the aquarium, which has four white whales.

"We don't know what disease she suffers from. We hope experts from home or abroad will join us in our efforts to save Tina."

Xu Ting, at Qingdao Seaside Charity Hospital, said it is still too early to tell whether the illness is threatening her life.

"But she is getting thinner each day," Xu said.

Tina, who was imported from Russia in 2004, is a "priceless" addition to the marine theme park, after more than two years of training, Liu said. The new tourism season starts in May.

There are about 62,000 to 80,000 white whales in the world, living around the North Pole. However, the number is decreasing due to commercial hunting.