Researcher: Rare Bottom-Breathing Turtles Can Stay Submerged Up to a Week

Researcher: Diver's Breathing Could Be Used To Thwart Underwater Attack 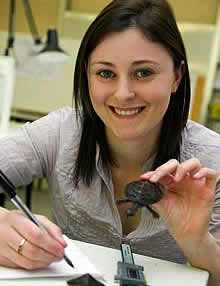 University of Queensland PhD student Natalie Mathie, who has been studying Mary River hatchlings for the last two years, has shown that the turtle can stay submerged for at least three days, possibly up to a week in the right conditions.

Ms Mathie said unlike most fresh water turtles, the Mary River Turtle could extract about half of its oxygen requirements from river water using special sacs in its bottom.

The endangered Mary River Turtle is unique to the Mary River and it's believed only hundreds of eggs are laid each breeding season.

Ms Mathie, with UQ's School of Integrative Biology, has been studying how changes in water temperature, oxygen levels and also the presence of predators affect the turtles' respiration and diving behaviour.

She believes their diving is a survival strategy to lessen their chance of being eaten by birds on the surface or by fish and eels.

She also tested the turtles' performance in cooler and hotter temperatures and found that they didn't adapt well to any temperature changes.

Ms Mathie said the Mary River Turtle was under threat because turtle eggs were being eaten by cats, dogs and foxes or their nests were being trampled by cows along the river.

She is also worried about how the planned Traveston Dam will change the Mary River landscape and damage turtle habitat washing away undercut banks, nesting banks, fallen logs and well oxygenated streams.

“The Dam will have a lot less oxygen and it will also be cooler because it's deeper.”

Ms Mathie, who has been supported by the local Tiaro Landcare group, will soon fix depth recorders and transmitters to the shells of adult turtles.

She said this would allow her to exactly measure their diving rates and where and how far away they were living and nesting.