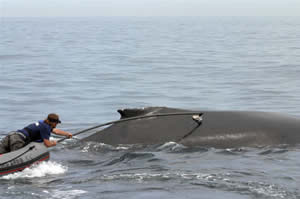 For the first time, researchers have recorded “megapclicks” — a series of clicks and buzzes from humpback whales apparently associated with nighttime feeding behaviors — in and around NOAA’s Stellwagen Bank National Marine Sanctuary. As detailed in the most recent issue of the Royal Society journal Biology Letters, this study offers the first documentation that baleen whales produce this type of sound, normally associated with toothed whales and echolocation.

“We’ve known that humpback whales exhibit a variety of foraging behaviors and vocalizations, but these animals as well as other baleen whales were not known to produce broadband clicks in association with feeding,” said David Wiley, sanctuary research coordinator and leader of the research team. “However, recent work with special acoustic tags has made us reexamine our previous assumptions, with this expansion of the acoustic repertoire of humpback whales.”

Alison Stimpert of the Hawaii Institute of Marine Biology, the lead author on the paper, labeled the sounds “megapclicks” based on their form and the scientific name for humpback whales (Megaptera novaeangliae). This acoustically active species has been known to produce complex “songs” on their breeding grounds, but knowledge of sound production on northern feeding grounds has been limited.

The researchers report that the similarity of the megapclicks to sounds made by toothed whales suggests echolocation-assisted feeding behaviors, especially where buzzes at the end of a series of clicks appear to be associated with attempts to capture prey. The sounds may also be used to detect the sea floor or other large targets. Another possibility for the megapclicks could be to attract prey, such as herding schools of fish or chasing animals out of the sediments. But the research team notes that a lack of knowledge about baleen whale hearing and sound production prevents any definitive answers at this time about the function of the megapclicks.

The report appeared in the Aug. 8, 2007 on-line issue of Biology Letters. Funding for the project was provided by NOAA’s National Marine Sanctuary Program and the University of Hawaii Sea Grant College Program. Research was conducted under National Marine Fisheries Service permit no. 981-1707-00.

Stellwagen Bank National Marine Sanctuary encompasses 842 square miles of ocean, stretching between Cape Ann and Cape Cod offshore of Massachusetts. Renowned for its scenic beauty and remarkable productivity, the sanctuary is renowned as a whale watching destination and supports a rich assortment of marine life, including marine mammals, seabirds, fishes, and marine invertebrates. The sanctuary’s position astride the historic shipping routes and fishing grounds for Massachusetts’ oldest ports also make it a repository for shipwrecks representing several hundred years of maritime transportation.