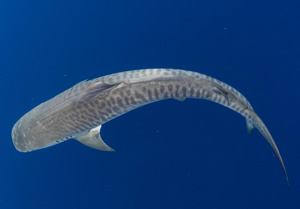 FORT LAUDERDALE, Fl -- Tiger sharks are among the largest and most recognizable sharks on the planet, yet many of their habits remain mysterious because they are long-distance travelers that are hard to track. But a new study, reported in the June 9 issue of the journal Scientific Reports (http://www.​nature.​com/​srep/​2015/​150609/​srep11202/​full/​srep11202.​html), has yielded the first ever continuous, two or more-year satellite tagging tracks for the animals. This study reveals remarkable, and previously unknown, migration patterns more similar to birds, turtles and some marine mammals than other fishes.

Long believed to be mainly a coastal species, the tiger sharks, in fact, made more than 7,500 kilometer, round-trip journeys every year between two vastly different ecosystems -- the coral reefs of the Caribbean and the open waters of the mid-North Atlantic. Furthermore, they returned reliably to the same overwintering areas each year, a discovery with significant conservation implications.

The study was led by James Lea and Brad Wetherbee, Ph.D., co-first authors, and senior author, Mahmood Shivji, Ph.D., all of whom work out of Nova Southeastern University's (NSU) Guy Harvey Research Institute in Florida. Renowned marine artist and conservationist Guy Harvey, a Ph.D. fisheries ecologist, is also an author on the paper and co-led the project's tagging work, which took place near Bermuda, in collaboration with the Bermuda Shark Project.

'As apex predators, the presence of tiger sharks -- and other large sharks -- is vital to maintain the proper health and balance of our oceans,' said Dr. Shivji, who is professor at NSU and also the director of NSU's GHRI. 'That's why it's so important to conserve them, and understanding their migratory behavior is essential to achieving this goal.'

Background The details of the movements and migrations of tiger sharks and most other large shark species have been a mystery because they are difficult to track for more than a few months because of tag or other logistic limitations. For this project, the tags the team attached to sharks near Bermuda lasted in many cases more than two years, and in some cases more than three years, sending satellite position data each time an animal surfaced.

One tiger shark, named Harry Lindo, traveled more than 44,000 kilometers (27,000 miles), the longest track distance documented for a tiger shark and possibly the longest ever published for a shark.

'It is truly remarkable,' said Harvey of the animal's travels.

Tiger Shark Highway The researchers were able to show that adult male tiger sharks in the Atlantic repeatedly spend their winters in Caribbean island locales including the Bahamas, Turks and Caicos Islands, and Anguilla. Then, during summers, they travel far into the North Atlantic, often more than 3,500 kilometers and as far north as Connecticut, though well offshore in nearly the middle of the ocean.

'These repeated journeys were very unexpected,' said Lea, who also works out of the Marine Biological Association of the United Kingdom, 'The tiger shark has traditionally been considered a coastal species, and it is rare among sharks to so easily and habitually switch between the two vastly different environments.'

Remarkably, the sharks followed the same pattern each year and returned to almost the same small area in the Caribbean each time.

'Even though they've got a whole range of islands to choose from, it seems like each animal has its favorite winter spot,' said Shivji.

For the tiger sharks, the migrations are something like a 'highway road trip,' on their way to definite destinations. Bermuda is a handy spot for tiger shark tagging because it is the equivalent of a popular highway exit -- lots of animals stop off there for a break while heading north or south. But for the most part the animals travelled directly between their migration destinations, meandering around only after arriving.

Why they go so far north is more complicated. How far they go seems to be guided by avoidance of colder temperatures -- information that offers one example of how migration research can help to predict the implications of climate change for sharks.

'There's got to be something really good up there to make the sharks undertake such massive, repeated swims, but exactly what is a puzzle,' said Shivji.

One possibility is that they go to feed on young loggerhead turtles that also migrate north -- indeed when the researchers examined stomachs of some tiger sharks killed by long liners in the region, they found turtle remains. But then there are also turtles much farther south.

Great White Similarities The only other instance where researchers have found a broadly similar, repeated migration pattern between coastal and distant open water regions is with the warm-bodied, great white and salmon sharks in the Pacific Ocean. White sharks migrate in the winter from the California and Baja coasts to a mid-Pacific open water area dubbed the 'White Shark CafÃ©.'

'We joke that tiger sharks, not being media stars like white sharks, wouldn't be comfortable in a 'cafÃ©' and prefer to hang-out in their 'truck-stop' in the mid-Atlantic,' says Wetherbee, who is also based at the University of Rhode Island.

Conservation Implications Tiger sharks are nearing threatened status, in part because of targeting for the soup fin trade. One of the most important implications of the new research, therefore, is for conservation.

'Understanding how these animals use the oceans is the first step toward effective conservation,' said Harvey. 'Protecting migratory species is a great challenge because they can be found in such a wide area. Protecting the areas where animals, such as tiger sharks, spend the most time is a tractable goal once those areas have been identified.'

Guided in part by early access to the GHRI team's data about the importance of the Bahamas habitat to the tiger shark's annual migratory pathways, The Bahamas government established a shark sanctuary in 2011 prohibiting commercial shark fishing in their territorial waters.

How to Follow Sharks All of the satellite tracks for tiger sharks in this study, as well as ongoing tracks for other species including mako sharks, oceanic whitetip sharks and marlins, can be found online at http://www.​ghritracking.​org