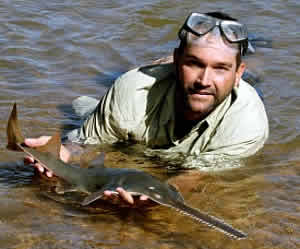 Reno Nevada -- University of Nevada, Reno researcher Zeb Hogan, who travels the globe to find, study and protect monster freshwater fish, has been named a National Geographic Fellow â one of only 15 men and women worldwide.

"It's a great honor," Hogan said. "At its most basic, the Fellow position makes it easier for me and the National Geographic Society to work together on collaborative projects. It's also a recognition of the important work being done here at the University of Nevada, Reno."

The Fellows Program was created to encourage the flow of ideas between National Geographic and field experts such as Hogan, who is a research assistant professor in the University's Department of Natural Resources and Environmental Science and a member of the University's Aquatic Ecosystems Laboratory.

As a National Geographic Fellow, ecologist and photographer Hogan will serve as an expert advisor to the National Geographic's freshwater and biodiversity programs, developing educational and outreach resources and writing and reviewing project proposals and grants.

"Zeb has embraced not only the science, but also the need to communicate his message to a wider audience, which is what National Geographic is all about," said Alexander Moen, vice president of National Geographic's Explorer Programs. "Zeb has an exceptional ability to identify with people of all ages and cultures and inspire them to care about freshwater fish that are facing an uncertain future."

Other National Geographic Fellows include a linguist who studies endangered languages, the world's foremost (and one of the first) tropical biologists, a chef committed to sustainable cuisine and a man who took a 17-year-long vow of silence to draw attention to biological degradation. Hogan is added to the group as a conservation biologist.

As leader of expeditions for National Geographic's Megafishes Project, Hogan journeys around the world on his quest to protect the world's largest freshwater fish, which measure more than six feet in length and weigh at least 200 pounds. Hogan has already studied 18 of the 24 known megafish species, including the 23-foot-long Australian sawfish, 10-foot-long alligator gar, 14-foot-long endangered giant stingray and the 600-pound, 10-foot-long Mekong giant catfish.

Other sites include (among others) the Amazon River, the Mekong River, the Mississippi River, the Nile, the Lake Baikal watershed in Russia, the Okavango Delta, Lake Malawi National Park, the Sundarbans, the Danube Delta and the Yangtze River.

He also works to establish conservation programs in these areas to protect the threatened fish. As a result of Hogan's work with the governments of Cambodia, Thailand, and Laos, it is now illegal to capture the Mekong giant catfish in those countries as of summer 2006. Hogan has also worked with groups in the United States, such as along the Kootenai River and the Great Lakes, on conservation projects.

He spent two years as a post-doctoral researcher focusing on the ecology and conservation of the world's largest trout. He was a Fulbright Scholar at the Environmental Risk Assessment Program at Thailand's Chiang Mai University, has served as a World Wildlife Fund freshwater fellow and is an advisor to the University of Nevada, Reno Student Chapter of the American Fisheries Society.