Researchers:1 in 3 Chance of Record Low Arctic Sea Ice in 2007 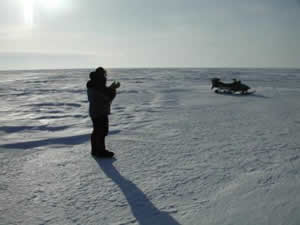 BOULDER, Colorado -- University of Colorado at Boulder researchers are now forecasting a 92 percent chance that the 2007 September minimum extent of sea ice across the Arctic region will set an all-time record low.

The researchers, who forecast in April a 33 percent chance the September minimum of sea ice would set a new record, dramatically revised their prediction following a rapid disintegration of sea ice during July, said Research Associate Sheldon Drobot of CU-Boulder's Colorado Center for Astrodynamics.

"We have been seeing a sharp decline in thicker, multi-year ice that has survived more than one melt season," said CCAR Research Associate James Maslanik. "This has been replaced in many areas by a thin, first-year layer of ice as well as by younger, thinner types of multi-year ice. The thinner ice just does not have the mass to withstand the effects of warming climate."

Sea-ice extent -- the area of an ocean covered by at least 15 percent of ice -- has been declining at least since the late 1970s, when concerted satellite measuring efforts began, said Drobot. The ongoing decline is believed by many researchers to be due primarily to higher temperatures due to warming from greenhouse gas emissions.

The factors triggering the unusually strong July sea-ice decline appear to be a combination of less multi-year ice and more cloud-free days, which accelerated the melting effects of solar radiation on the ice, Drobot said. "Things can really change fast, which is why we continually update our forecasts," he said.

The CCAR researchers used satellite data from the U.S. Department of Defense and temperature records from the National Oceanic and Atmospheric Administration for the forecasts, which they have been producing for five years, said Drobot. The sea ice research by the CCAR group -- the only group in the world currently making seasonal Arctic sea ice forecasts based on probability -- is funded by the National Science Foundation and NASA, he said.

According to researcher Walt Meier of CU-Boulder's National Snow and Ice Data Center, the current sea ice conditions are rapidly approaching the record daily minimum already, with at least a few more weeks of melting likely.

Arctic sea ice is "one of the better predictors of climate change on Earth," Drobot said. "There will probably be about two-thirds as much sea this September as there was 25 years ago, a good indication that something significant is happening with the climate."

The Arctic sea ice decline has been sharpest in the western Arctic over the past few years, said Drobot. Such regional variation is of interest to the maritime industry, including government agencies, international shipping companies, energy exploration corporations and tourism cruise lines active in the far North, he said.

"This type of information is useful for ship operators trying to plan activities several months out," Drobot said. "It's also useful for short-term operational planning, including cruise ship excursions."

Assuming the sea ice decline continues in the Arctic, there probably will be a significant amount of intercontinental "Northwest Passage" type of transit from North America to places like Europe in the coming decades, Drobot said. A seasonal or year-round, ice-free channel through the Arctic waters would be significantly shorter and more cost effective than shipping through the Panama Canal, Drobot said.