Researcher: Earth's Deepest Secrets May Come From The Sea; MERMAIDs To Listen To Underwater Seismic Waves 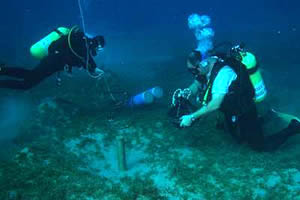 New geoarchaeological research at the University of Haifa exposes evidence of four tsunami events on the coast of Israel. Credit: Eran Brokovich

HAIFA, Israel -- "There is a likely chance of tsunami waves reaching the shores of Israel," says Dr. Beverly Goodman of the Leon H. Charney School of Marine Sciences at the University of Haifa following encompassing geoarchaeological research at the port of Caesarea. "Tsunami events in the Mediterranean do occur less frequently than in the Pacific Ocean, but our findings reveal a moderate rate of recurrence," she says.

Dr. Goodman, an expert geo-archaeologist, exposed geological evidence of this by chance. Her original intentions in Caesarea were to assist in research at the ancient port and at offshore shipwrecks. "We expected to find the remains of ships, but were surprised to reveal unusual geological layers the likes of which we had never seen in the region before.

We began underwater drilling assuming that these are simply local layers related to the construction of the port. However, we discovered that they are spread along the entire area and realized that we had found something major," she explains.

In an article published in Geological Society of America Bulletin, Dr. Goodman explains that the earliest of these tsunamis resulted from the eruption of the Santorini volcano, which affected the entire Mediterranean region. The later, more local tsunami waves, Dr. Goodman assumes, were generated by underwater landslides caused by earthquakes.

"'Local' does not necessarily imply 'small'. These could have been waves reaching 5 meters high and as far as 2 km onshore. Coastal communities within this range would have undoubtedly been severely damaged from such a tsunami. While communities onshore clear the ground after such an event and return to civilization, tsunami evidence is preserved under the water," she explains.