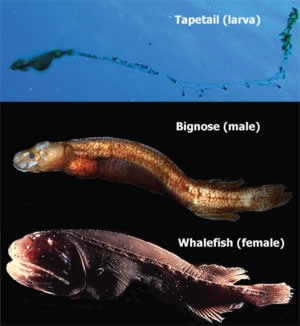 New research has revealed that the tapetail, bignose and whalefish are all the same fish

WASHINGTON, D.C. -- For decades scientists have known about three different fishes called tapetails, bignose fishes and whalefishes. A team of scientists, including Smithsonian ichthyologist Dave Johnson, however, have recently discovered that they are actually all part of the same family. The team’s findings are being published in the journal Biology Letters by the Royal Society in London today.

The mid-depths of the ocean between sunlit surface waters and the bottom, known as the bathypelagic realm ( 1,000-4,000 meters ), constitute the largest yet most poorly studied ecological area on Earth. Recently captured deep-sea fishes and older museum specimens have enabled scientists to solve a decades-old puzzle, uniting three previously recognized families as one. Johnson and the team studied the DNA and the very different body structures of the tapetails ( Mirapinnidae ), bignose fish ( Megalomycteridae ) and whalefish ( Cetomimidae ) and found that the three are actually the larvae, males and females, respectively, of a single family: Cetomimidae. The scientists have documented a remarkable combination of developmental transformations and sexual dimorphism ( the difference in appearance between males and females ) that is unparalleled among vertebrates. The solution involved detailed analyses of changes in the anatomy of specimens in transition from larvae to females and larvae to males and DNA analyses of all three life stages.

“This is an incredibly significant and exciting finding,” said Johnson, from the Smithsonian’s National Museum of Natural History. “For decades scientists have wondered why all tapetails were sexually immature, all bignose fishes were males and all whalefishes were females and had no known larval stages. The answer to part of that question was right under our noses all along—the specimens of tapetails and bignose fishes that were used to describe their original families included transitional forms—we just needed to study them more carefully.”

A molecular clue and fresh specimens spurred Johnson and co-author John Paxton, of the Australian Museum, to look more closely, and then came the fortuitous capture of a transitional female in 2007 by co-author Tracey Sutton of the Virginia Institute of Marine Science. With that, the Japanese team, led by Masaki Miya of Chiba University’s Natural History Museum and Institute, analyzed DNA from additional specimens, and it all fell into place. “This is the sort of puzzle solving that a scientist dreams about!”

Morphological transformations of whalefishes involve dramatic changes in the skeleton, most spectacularly in the head, and are correlated with distinctly different feeding mechanisms. Larvae have small, upturned mouths and gorge on small crustaceans called copepods. Females have huge gapes with long, horizontal jaws and specialized gill arches allowing them to capture larger prey. Males, on the other hand, lose their stomach and esophagus after transformation and so, do not eat; they rely instead on a huge liver to support their search for females. Whalefishes, which are not whale-like in size ( females grow up to 16 inches and mature males are no larger than 2.5 inches ) are named for the shape of their body. The approximately 20 known species of whalefishes are found throughout the world’s open oceans.