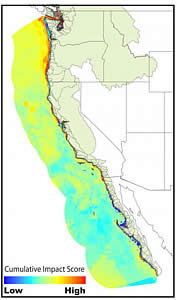 WASHINGTON, D.C. -- Climate change, fishing and commercial shipping top the list of threats to the ocean off the West Coast of the United States.

"Every single spot of the ocean along the West Coast," said Ben Halpern, a marine ecologist at the National Center for Ecological Analysis and Synthesis (NCEAS) at the University of California at Santa Barbara, "is affected by 10 to 15 different human activities annually."

In a two-year study to document the way humans are affecting the oceans in this region, Halpern and colleagues overlaid data on the location and intensity of 25 human-derived sources of ecological stress, including climate change, commercial and recreational fishing, land-based sources of pollution and ocean-based commercial activities.

With the information, they produced a composite map of the status of West Coast marine ecosystems.

The work was published online today in the journal Conservation Letters, and was conducted at NCEAS. NCEAS is primarily funded by NSF's Division of Environmental Biology.

"This important analysis of the geography and magnitude of land-based stressors should help focus attention on the hot-spots where coordinated management of land and ocean activities is needed," said Phillip Taylor, section head in NSF's Division of Ocean Sciences.

The lead scientists on the study conducted a similar analysis on a global scale; the results were published last year in Science.

By refining the methods used in the global study and applying them at a regional scale, the scientists were able to test how well the results predicted regional ocean health.

"We found two remarkable and unexpected results in this research," said Halpern.

"Ocean management needs to move beyond single-sector management and towards comprehensive ecosystem-based management if it is to be effective at protecting and sustaining ocean health.

The study results show that hotspots of cumulative impact are in coastal areas near urban centers and heavily polluted watersheds.

The research involved a four-step process.

First, the scientists gathered information to quantify and compare how different human activities affect each marine ecosystem. For example, fertilizer runoff was shown to have a large effect on salt marshes, but a much smaller one on rocky reefs.

Then the researchers gathered and processed data on marine ecosystems and human influences.

Next they combined data from the first and second steps to determine "human impact scores" for each location along the West Coast.

Finally, they compared regional results to global results for the same areas from the previous analysis.

"Comparing the global version of the map to regional-scale versions allows us to determine where it performs best," said biologist and paper co-author Kim Selkoe, also of NCEAS.

"The high correlation is good news for marine managers in areas of the world that may be in need of maps of human impacts, but don't have the resources to undertake their own tailored analysis."

The study provides critical information for evaluating where certain activities can continue with little effect on the oceans, and where other activities might need to be stopped or moved to less sensitive areas, said Taylor.

As management and conservation of the oceans turns toward marine protected areas (MPAs), ecosystem-based management (EBM), and ocean zoning to manage human influence, such information will prove invaluable to managers and policymakers, said Halpern.

"The results are a wake-up call," he said. "We are significantly affecting the oceans."