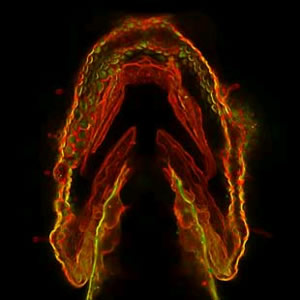 Fluorescently labeled sugars light up to reveal cells in the skin layer of the jaw region of a three-day-old. Amacher lab/Amacher lab/UC Berkeley

BERKELEY, California -- Using artificial sugar and some clever chemistry, University of California, Berkeley, researchers have made glow-in-the-dark fish whose internal light comes from the sugar coating on their cells.

This novel method of fluorescently tagging the sugar chains, or carbohydrates, that coat cells is a new tool for those studying development in the zebrafish, a laboratory organism popular because its transparent embryos allow easy observation of living cells as they develop over time.

"Most people think of carbohydrates as food, but the surface of any cell in our body is adorned with a ton of sugars as well as proteins that allow cells to communicate with other cells and invading pathogens," said UC Berkeley graduate student Jeremy M. Baskin. "People have had for many years the ability to image specific proteins, but not carbohydrates. We have developed for the first time methods for labeling and imaging carbohydrates inside an intact animal."

"An understanding of how, when and where cells dust themselves with sugar may shed light on how stem cells develop into tissues, as well as turn up markers of disease, such as cancer, or strategies for battling infectious organisms," said first author Scott T. Laughlin, who, like Baskin, is a graduate student in the Department of Chemistry.

One big advantage of the technique is that it is non-toxic and can be used to study living cells, Baskin said, whereas other methods of tagging cell-surface carbohydrates cannot be performed on living specimens.

Baskin and Laughlin, together with Carolyn Bertozzi, UC Berkeley professor of chemistry and of molecular and cell biology, and developmental geneticist Sharon L. Amacher, associate professor of molecular and cell biology, reported their results in the May 2 issue of the journal Science. Bertozzi also is director of the Molecular Foundry at Lawrence Berkeley National Laboratory, a Howard Hughes Medical Institute investigator, and the T.Z. and Irmgard Chu Distinguished Professor of Chemistry at UC Berkeley.

"We have genes in our body coding for proteins, but proteins get modified in lots of different ways, one of which is by addition of sugars that stick out on the cell surface and change the way the protein interacts with the environment," Amacher said. "One of the big mysteries is how the pattern of sugar modification changes during development, or in cancer cells versus non-cancer cells, for example. The exciting work Carolyn is now doing is finding ways that we can actually see the sugar labels on proteins."

Scientists have known for more than a century how to attach fluorescent dyes to proteins, and have used the technique to study protein trafficking in cell culture and even in whole organisms, though often at the expense of killing the cells or organism. Bertozzi has focused on making it just as easy to study the sugars on cells, in part to investigate their role in such diseases as tuberculosis and influenza. In the latter, the flu virus enters cells by way of hemagglutinin, a sugar-protein complex on the viral surface that attaches to sugars on the surface of host cells. But sugars clearly have roles in cell-to-cell communication that have yet to be discovered.

One technique Bertozzi has developed is to feed cells an artificial sugar that looks so much like the real thing that cells are tricked into incorporating the sugar into their carbohydrate chains. Once the sugar becomes part of the forest of carbohydrates adorning a living cell, she then uses a non-toxic chemical reaction to attach small organic labels to it. Simple, highly selective and non-toxic chemical reactions like this have come to be called click chemistry.

In their work on zebrafish, Baskin, Bertozzi and their colleagues soaked zebrafish embryos in the artificial sugar N-azidoacetylgalactosamine, which the embryo cells then used as a carbohydrate building block to replace the natural sugar N-acetylgalactosamine. The researchers then modified a chemical reaction that is normally toxic to cells to eliminate the toxic copper catalyst and employed this reaction to attach a small fluorescent molecule, a fluorophore, to the "azido" part of the unnatural sugar.

The copper-free click chemistry worked with three separate fluorophores, enabling the researchers to make two-to five-day-old zebrafish cells glow red, green and even near infrared, which is invisible to the eye but can be detected by some microscopes. They were able to observe differences over time in when and where on a single cell the sugar appeared, sugar movement through the cell interior, and in which tissues the sugar showed up.

"We're hoping to extend the technique to other sugars, too," Baskin said, noting that of the nine sugars used by vertebrates to build carbohydrates, Bertozzi's lab has found artificial surrogates for four of them. "We also want to try getting (artificial sugar) to work in different organisms and different disease models, such as cancer models in mice. Basically, we are providing this as a tool for the general community to use."

Amacher, who studies tissue patterning in the very early zebrafish embryo, is anxious to work with the labeling technique, but is waiting until Bertozzi's group gets it to work in hours-old embryos, at a stage when muscles and organs begin to form.

"Once they get the labeling technique to work at very early times, it is going to be an even more exciting collaboration, and hopefully, a continuing one," she said.

The work was supported by the National Institutes of Health.