Researchers Discover A New Way Fish Camouflage Themselves In The Ocean

Researchers Discover How Mercury Gets Into Fish We Eat: Oxidation 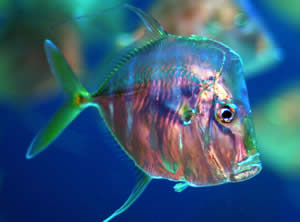 AUSTIN, Texas -- Fish can hide in the open ocean by manipulating how light reflects off their skin, according to researchers at The University of Texas at Austin. The discovery could someday lead to the development of new camouflage materials for use in the ocean, and it overturns 40 years of conventional wisdom about fish camouflage.

The researchers found that lookdown fish camouflage themselves through a complex manipulation of polarized light after it strikes the fish skin. In laboratory studies, they showed that this kind of camouflage outperforms by up to 80 percent the "mirror" strategy that was previously thought to be state-of-the-art in fish camouflage.

The study was published this week in the Proceedings of the National Academy of Sciences (PNAS). The research was funded by the U.S. Navy, which has an interest both in developing better ocean camouflage technologies and in being able to detect such strategies if developed by others.

"The open ocean represents a challenging environment for camouflage," said Molly Cummings, associate professor of integrative biology in the College of Natural Sciences. "There are no objects to hide behind in three-dimensional space, so organisms have to find a way to blend in to the water itself."

For the past few decades the assumption has been that the optimal camouflage strategy for open ocean fish is to reflect sunlight like a mirror. Many fish, including the lookdown, have reflective skin elements that can act like mirrors.

Such a strategy works well for certain aspects of light, such as color and intensity, which tend to be distributed homogenously in the region surrounding the fish. The mirror strategy is not optimal, however, when light is polarized, which occurs when individual waves of light align parallel to one another.

"In the polarized light field, there is a lot of structure in the open ocean," said physicist Parrish Brady, a postdoctoral associate in Cummings' lab. "Humans can't see it, but more than 60 different species of fish have some degree of polarization sensitivity. They can perceive the structure in the light."

The contours of the polarized light field in the open ocean environment are constantly changing except at noon, when the sun is directly overhead. A fish needs to do more than deploy the straight mirror strategy in order to stay camouflaged. Cummings hypothesized that perhaps nature had evolved a strategy to do just that.

She and Brady caught some lookdowns, which are known as good camouflagers. In tanks in the lab, they simulated the sun passing over the ocean during the course of a day, and they used a custom-built polarimeter to measure how the lookdowns reflected the polarized light.

They found that the lookdowns were able to manipulate their reflective properties in ways that were close to the theoretical optimum and far better than a standard mirror.

The lookdown's "polaro-cryptic" mirror skin functions by selectively reducing the degree of polarization and transforming the angle of polarization of the reflected light depending on the conditions.

The researchers' next task is to understand how the fish are accomplishing this feat.

Cummings said it might be an entirely passive process, with different elements of their skin automatically responding to the angle of the sunlight. Or, the lookdowns may aid in their camouflage by subtly altering their bodies' orientation relative to the sun, or by neurologically ramping up certain processes.

What the researchers discover about these mechanisms will be of particular interest to the Navy, which at present isn't as good as lookdowns at open ocean camouflage.

"From an evolutionary biologist viewpoint, I am always excited when evolution is one step ahead of humans," said Cummings. "There is this problem out there â how to blend in to this environment, and though we haven't quite solved it yet, an animal has. We can identify these basic biological strategies, and perhaps materials scientists can then translate them into useful products for society."