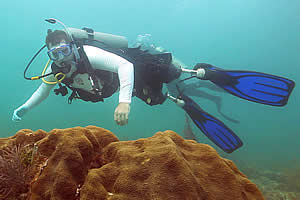 Just seven months after he lost both legs and full use of his right arm following an attack in Afghanistan, a U.S. Army Special Operations soldier has been reintroduced to scuba diving with his wife and son who are learning to dive in the Florida Keys National Marine Sanctuary.

Schroeder is one of seven severely wounded Special Operations soldiers learning or refining scuba skills with their families in Key West this week during a trip coordinated by Task Force Dagger Foundation, a Texas-based organization established in 2009.

Late Tuesday afternoon Schroeder dove on a shallow reef with his wife and son, who are earning open-water scuba certifications.

"We're in a hospital environment all the time, and to come out here as a family is a great thing," said Schroeder. "Emotionally, we're recharging and rehabilitating."

Before his own injuries, sustained last December when his vehicle rolled over a hidden roadside bomb, Schroeder had contacted Task Force Dagger Foundation managing director Keith David about donating his time and energy to the organization to help wounded comrades.

"I originally thought I was going to be on the giving end," he said. "Here I find I'm on the receiving end of the foundation, and I'm blessed that they were there to help me and my family recover together."

Despite being scuba certified in the late 1980s, Schroeder had to take a refresher course primarily to adapt his knowledge to his new capabilities. Special hi-tech prosthetic "swim legs" help propel him through the water.

"Every time we go on a vacation, one thing he wants to do is go diving, but he won't do it because we're not certified," said Laura Schroeder. "So now, when we go on vacations, we can certainly go out with him."

"When the soldier is injured or wounded, the whole family is wounded," David said. "One of the things we try and do is help them heal as a family unit."

The week-long project, that ends Friday, has been embraced by the Key West community. Hotels have given reduced-rate accommodations, while dive shops and restaurants are providing complimentary trips and meals.