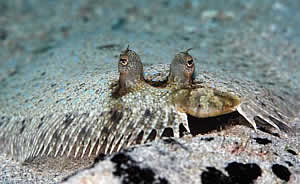 Like other bony fish, the peacock flounder can change the color and pattern of its skin to blend into the sea floor. photo by Jimmie Mack

NASHVILLE, Tenneseee -- Researchers led by Vanderbilt's Roger Cone, Ph.D., have discovered a new member of a gene family that has powerful influences on pigmentation and the regulation of body weight.

The gene is the third member of the agouti family. Two agouti genes have been identified previously in humans. One helps determine skin and hair color, and the other may play an important role in obesity and diabetes.

The new gene, called agrp2, has been found exclusively in bony fish, including zebrafish, trout and salmon. The protein it encodes enables fish to change color dramatically to match their surroundings, the researchers report this week in the early edition of the Proceedings of the National Academy of Sciences (PNAS).

"When my graduate student, Youngsup Song, discovered a third agouti protein in the fish pineal gland, an organ that regulates daily rhythms in response to light, we initially thought we had found the pathway that regulates hunger diurnally," said Cone, chair of the Department of Molecular Physiology & Biophysics and director of the Vanderbilt Institute for Obesity and Metabolism.

"That is the mechanism that makes you hungry during the day, but not at night," he continued. "However, Chao Zhang, a graduate student who followed up the study, ultimately discovered that this agouti protein â¦ is involved in the rapid pigment changes that allow fish to adapt to their environment."

This phenomenon, called background adaptation, also has been observed in mammals. The coat of the arctic hare, for example, turns from brown in summer to white camouflage against the winter snow.

In contrast to mammals that have to grow a new coat to adapt to a changing environment, fish, amphibians and reptiles can change their skin color in a matter of minutes.

The first agouti gene, which produces the striped "agouti" pattern in many mammals, was discovered in 1993. The same year, Cone and his colleagues at Oregon Health Sciences University in Portland reported the discovery of the gene that encoded the melanocortin-1 receptor, a key player in the pigmentation story.

They demonstrated that the agouti protein prevented the melanocortin-1 receptor in melanocytes (pigment cells) in the skin from switching on production of black-brown pigment, and instead shifted the pigment to yellow-red hues.

The second agouti gene encodes agouti-related protein (AgRP), which blocks a melanocortin receptor in the brain. It prevents the melanocortin-4 receptor from inhibiting food intake, and thus stimulates eating.

In the current paper, Cone's group reports that the newly discovered protein, AgRP2, regulates expression of the prohormone genes pmch and pmchl, precursors to melanin-concentrating hormone, which has a pigment-lightening effect.

"Together, the versatile agouti proteins and melanocortin receptors are responsible for regulation of body weight, the banded patterns of mammalian coats, and even red hair in most people," Cone said. The current work shows that agouti proteins are also involved in the camouflage mechanisms used in thousands of fish species.

Cone, who came to Vanderbilt in 2008, has spent most of his career studying how the melanocortin receptors in the brain regulate body weight. He and his colleagues have published more than three dozen papers elucidating elements of this complex signaling system.

The study was supported by the National Institutes of Health and the Bristol-Myers Squibb Foundation.