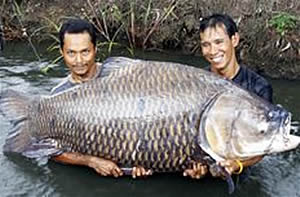 BANGKOK, Thailand -- A claim has been made that the world's biggest carp has been caught in Thailand by a local fisherman named Kik. Kik, who works as a guide for mainly European sportsmen, said the monster carp was caught caught on a homemade rod and was too heavy for the angler's scales.

Kik belongs to the Jean-Francois Helias' Fishing Adventures team and was trying to catch a Mekong catfish.

Instead he hooked the Siamese Giant Carp, or Catlocarpio siamensis, which was one of five giant carp put into the lake 23 years ago.

Since then, only one other has been caught but anglers will now surely be drawn to the Bung Sam Lan Lake to try and land one of the "biggies". Jean-Francois Helias said: "Kik was guiding an American client at the lake and took with him his own custom built rod. "He was planning to hook and play a Mekong giant catfish to test the rod. "But he hooked the catch of a lifetime that some anglers would sell their soul to the devil for. "The Siamese Giant Carp we estimated at weighing just over 120kg or 265 pounds. She may be a tiny bit bigger but to say 120kg is fine with us.

"It is the biggest carp ever caught on rod and line in the history of sport fishing.

"It was a difficult fish to picture because it was so big and we had to call for help. And the fish kept slapping people with its tail. "It was raining heavily, but we managed to get it photographed."