Group: Half the World's Penguin Species Marching Towards Extinction; 'The Planet is in Denial'

Group: Kiwi Ministry Of Fisheries In Denial On Shark Finning 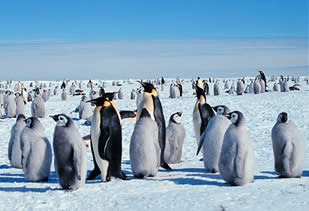 WASHINGTON, D.C. -- The Center for Biological Diversity, (Center), a non-profit conservation organization, filed a formal petition today requesting that 12 species of penguins worldwide be added to the list of threatened and endangered species under the United States Endangered Species Act.

The Emperor Penguin colony at Pointe Geologie, featured in the film "March of the Penguins," has declined by 70 percent. Krill, the keystone of the Antarctic marine ecosystem, and an essential food source has declined by as much as 80 percent since the 1970s over large areas of the Southern Ocean.

"These penguin species will march right into extinction unless greenhouse gas pollution is controlled," said Kassie Siegel, Director of the Center's Climate, Air, and Energy Program. "It is not too late to save them, but we must seize the available solutions to global warming immediately."

Each of the petitioned penguins also faces threats from introduced predators, disease, habitat destruction, disturbance at breeding colonies, oil spills, marine pollution, and in some cases, direct harvest. These species are also impacted by industrial fisheries when caught and killed in trawls and nets.

The Bush administration finalized a proposal this month which would clear the way for an expanded U.S. fishing fleet for krill in the otherwise protected waters off Antarctica. "It is absurd and illegal that the Administration would authorize krill harvesting off Antarctica without even considering the well-documented impacts of global warming on krill stocks and the penguins," said Brendan Cummings, Director of the Center's Oceans Program.

Listing under the United States Endangered Species Act will provide broad protection to penguins, including a requirement that United States federal agencies ensure that any action carried out, authorized, or funded by the United States government will not "jeopardize the continued existence" of the penguin species.

"The planet is in denial," said John Collee, co-writer of "Happy Feet," which played to rave reviews as the top movie in the United States over Thanksgiving week. "Coral reefs are in terminal decline. Whales and penguins are literally starving to death as a result of krill depletion. As regards Global warming - the entire West Antarctic ice sheet is balanced on the tips of mountains and fragmenting at the edges. According to experts we have ten years to reverse the current trend before the build-up of greenhouse gases becomes irreversible. Ten Years! Is "Happy Feet" too scary? The horrible reality of our war on the environment is so dark that most people don't want to contemplate it."