Researcher: Sea Level Has Been Rising And Falling Over The Last 2,500 Years; Fluctuations 'Nothing New Under The Sun'

Scientists Uncover A Dramatic Rise In Sea Level And Its Broad Ramifications; 21 Meters Higher 400,000 Years Ago 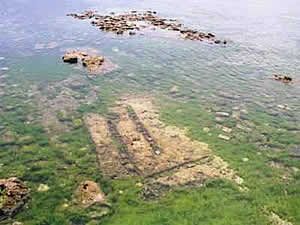 The Templar palace in Acre, seen here, is one of the sites where this study was carried out. Credit: Amir Yurman

HAIFA, Israel -- The sea level in Israel has been rising and falling over the past 2,500 years, with a one-meter difference between the highest and lowest levels, most of the time below the present-day level. This has been shown in a new study supervised by Dr. Dorit Sivan, Head of the Department of Maritime Civilizations at the University of Haifa. "Rises and falls in sea level over relatively short periods do not testify to a long-term trend. It is early yet to conclude from the short-term increases in sea level that this is a set course that will not take a change in direction," explains Dr. Sivan.

The rising sea level is one of the phenomena that have most influence on humankind: the rising sea not only floods the littoral regions but also causes underground water salinization, flooded effluents, accelerated coastal destruction, and other damage.

According to Dr. Sivan, the changing sea level can be attributed to three main causes: the global cause – the volume of water in the ocean, which mirrors the mass of ice sheets and is related to global warming or cooling; the regional cause – vertical movement of the earth's surface, which is usually related to the pressure placed on the surface by the ice; and the local cause – vertical tectonic activity. Seeing as Israel is not close to former ice caps and the tectonic activity along the Mediterranean coast is negligible over these periods, it can be concluded that drastic changes in Israel's sea levels are mainly related to changes in the volume of water.

In the present study, in light of earlier studies, research student Ayelet Toker and Dr. Sivan, set out to examine Israel's sea level over the past 2,500 years, based on data deduced from many coastal archaeological findings. They made a careful selection of findings that have been reliably and accurately dated, and first focused on findings that were excavated by the Antiquities Authority in Acre of the Crusader period. These revealed that the sea level during the Crusader period – just 800 years ago – was some 50-90 centimeters lower than the present sea level. Findings from the same period at Caesarea and Atlit reinforced this conclusion. When additional sites were examined from periods before and after the Crusader period, it was revealed that there have been significant fluctuations in sea level: During the Hellenistic period, the sea level was about 1.6 meters lower than its present level; during the Roman era the level was almost similar to today's; the level began to drop again during the ancient Muslim period, and continued dropping to reach the same level as it was during the Crusader period; but within about 500 years it rose again, and reached some 25 centimeters lower than today's level at the beginning of the 18th century.

"Over the past century, we have witnessed the sea level in Israel fluctuating with almost 19 centimeters between the highest and lowest levels. Over the past 50 years Israel's mean sea level rise is 5.5 centimeters, but there have also been periods when it rose by 10 centimeters over 10 years. That said, even acute ups and downs over short periods do not testify to long-term trends. An observation of the sea levels over hundreds and thousands of years shows that what seems a phenomenon today is as a matter of fact "nothing new under the sun", Dr. Sivan concludes.