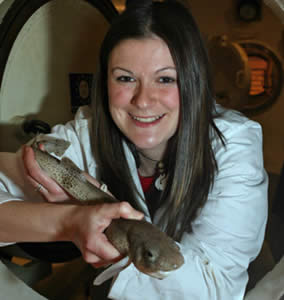 ABERDEEN, U. K. -- Ground-breaking research which could lead to sharks being used to predict the weather has been carried out at Aberdeen’s National Hyperbaric Centre.

Marine Biology student Lauren Smith is close to completing her PhD studies into the pressure sensing abilities of the species. She used the University of Aberdeen altitude chamber at the Ashgrove Road West centre to test her theories.

Lauren's research, which has taken her to the glamorous surroundings of the Bahamas, was carried out in the wild on lemon sharks. She used their smaller, near relations – the lesser spotted dogfish (also known as the small spotted catshark) – for her research at a chamber in the centre.

It is thought the work being carried out by the 24-year-old University of Aberdeen student is the first of its kind to attempt to test the pressure theory.

It was prompted by an earlier shark habitat study in Florida, which coincided with the arrival of Hurricane Gabrielle in 2001, when observations suggested that juvenile blacktip sharks moved into deeper water in association with the approaching storm.

If Lauren's studies prove the theory, scientists in the future could conceivably monitor the behaviour of sharks to anticipate severe weather fronts.

Said Lauren: "I've always been keen on travelling and diving and this led me to an interest in sharks. I was delighted to have been able to explore this area for my PhD, particularly as it's the first time it's really been explored fully.

"I'm also extremely fortunate to have the University of Aberdeen facilities at the National Hyperbaric Centre right on the doorstep. How many other students get the chance to put a shark in a chamber to study its behaviour!

She said: "Who can say if this could lead to sharks predicting weather fronts, there's so much more we need to understand. But it certainly opens the way to more research."

David Smith, Managing Director of the National Hyperbaric Centre said: "Lauren's ground-breaking work again underlines the diversity of work and research which goes on at the centre, in this case at the University of Aberdeen chamber. We look forward with interest to the publication of her findings."

Both Lauren and the NHC stress that there is no question of the dogfish being harmed in any way by the research. The changes in pressure mimic the pressure changes experienced in and around the ocean, caused by weather fronts, and the protocol was approved by the Home Office.

Lauren, who's originally from West Bromwich and completed her first degree (BSc Hons) in Marine Biology and Coastal Ecology at Plymouth University, studied shark behaviour in the wild at the Bimini Biological Field Station in the Bahamas.

It has been established that a shark senses pressure using hair cells in its vestibular system – a mechanism discovered by Dr Peter Fraser, Lauren's supervisor at the University of Aberdeen.

Work at the Bimini Shark Lab enabled her to observe shark behaviour by placing data logging tags to record pressure and temperature on juvenile lemon sharks, while also tracking them using acoustic tags and GPS technology. This let her determine the exact movements of the juveniles, the first time hydrostatic pressure sensing of sharks in situ has been approached in this way.

She was also able to help on existing projects at the Bimini shark lab, which involved catching larger sharks – Tigers, Bulls, Blacktips, Nurse and Caribbean Reef sharks - and carrying out exercises like measurements and tagging for ID purposes.

Said Lauren: "It was incredible to do this with these large sharks - the largest was a 13ft tiger which is more than double my length! To be out there, enjoying the Bahamian lifestyle and to get to see, handle and discuss sharks every single day really was a dream come true."

Back at base in Aberdeen, she was able to study the effects of tidal and temperature changes on dogfish in the aquarium at the Zoology building. She was pleased to find she could also test the pressure theory by recreating weather conditions at the University of Aberdeen chamber at the National Hyperbaric Centre.

Lauren's academic travels have also taken her to Boston in the US to present a paper on animal navigation at a meeting of the Institute of Navigation, and she will be travelling to London this summer when the Aberdeen University work from Dr Fraser's laboratory on balance and hydrostatic pressure reception will feature in the Royal Society Summer Science Exhibition.

She's due to complete her PhD and prepare papers for publication later this year and will be looking for a job which will give her the chance to expand her experience of shark research.

Since then its turnover has soared and the workforce has trebled, with the centre working on projects as diverse as this zoological study, to pressure testing ultra-deep offshore equipment and treating medical and diving emergency patients.

It recently celebrated its 20th anniversary with a multi-million pound plan to build the world's largest and deepest test chamber. The project, which could cost up to Â£10 million, would allow the centre to test subsea equipment to a depth of more than 3 miles.